Rape and kill as many boys as possible.

Greg Harper is the main antagonist of the 2019 movie I See You. He is a serial killer and a child rapist.

Greg was (supposedly) abused as a child and that caused him to be a pedophile towards boys aged 9-16. He kidnaps young boys and locks them in his trailer in the woods. When he's in a bad mood or having a bad day, he goes there and rapes them.

It's implied that Greg was abused as a child, and that caused him to be pedophilic. Later in life, he married his wife Jackie and they had a son named Connor together. Despite this, Greg sometimes would go look for boys to snatch. After he had raped and held them captive for a few months, he would mutilate them to death and bury them with green pocket knives. One day Greg kidnaps Alec and his friend Tommy Braun. After being raped and held captive for a few months, they escape. Tommy is so disturbed by the incident that he mutilates his own face. Tommy and Alec are unable to identify Greg as the man who kidnapped them, so Greg keeps living his life.

When Greg is in his 50s, he is a well known homicide detective and a loving father and husband. However, his wife, Jackie, cheats him and causes Greg and his now teenage son to lose trust in her. Greg then kidnaps Michael King and Justin Whitter and Greg turns out to be the lead Detective on finding the boys that he kidnapped.

Alec, now in his twenties, sees Greg in town and realizes that Greg is the man that kidnapped him. Due to this, Alec convinces his friend Mindy to break in Greg's house. When they get there, Alec immediately starts messing around the house and doing strange thing's to the family trying to make them believe they are losing their sanity. Mindy tries to convince him to stop but Alec continues on without care. One day, Todd, Jackie's former lover, stops by the house to see Jackie but Jackie wants him to go. However, an accidental dropping of a pot from Alec causes Todd to need to have Jackie brings him in the basement to patch him up. Seeing Todd down there, Greg smashes Todd's head in with a baseball bat, leaving the body there before heading off to work. Despite this, Jackie believes Connor is the culprit behind the murder.

Once told on this supposed deed, Greg acts like he needs to save Connor from going to prison, so he and Jackie hide the corpse. While they are gone, Alec attacks Connor and ties him up. Greg and Jackie get home and Jackie drives Connor to a hospital. Alec accidently knocks Mindy out so he puts her in the trunk of Greg's car, and Greg then takes the car with Mindy inside it and he drives it to his trailer. Mindy finds out about the trailer and calls the police, so Greg attacks her and knocks her out before driving her back to shoot her dead. Alec then attacks Greg with an axe and there is as a long struggle, with Alec eventually gaining the upper hand and killing Greg with his own gun. 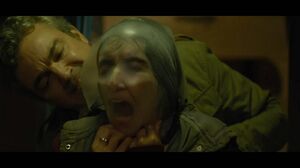 Greg suffocating Mindy until she passes out. 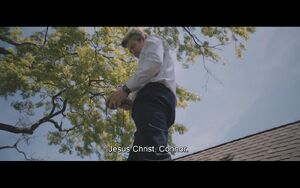 Greg discovering smokes on the roof that belong to Alec.

Greg talking to Tommy and Alec before kidnapping them. 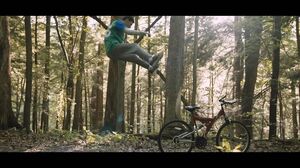 Greg using a wire tied to trees to make Justin fall off his bike.

The wire that Greg used to pull Justin off his bike.