Commander of the Hamlin Battalion

Destroy the United States as revenge for his poor treatment in the military (failed).

Lieutenant Colonel Gregory Barrows, simply known as Gregory Barrows, is the main antagonist of Time Crisis 4. He was the commander-in-chief of the Biological Weapon Special Operations Unit, also known as the Hamlin Battalion.

Gregory Barrows was born in 1958 in his home of Charleston, South Carolina. At some point, he joined the United States Army and led several secret regiments throughout his career. Then, Barrows was transferred to a top secret military unit called the Hamlin Battalion.

However, Barrows began to crumble upon himself as he did not receive any good treatment and authority he had garnished while in the service of the U.S. Army, causing him to develop stiff and absolute feelings of discontent against his own country. As a result, Barrows ordered all contingents of the Hamlin Battalion, including their sub-commanders Captain Marcus Black and the brothers Jack and Frank Mathers, to turn against the United States as well.

Barrows was first seen in appearance at the lowest section of the Colorado Air Force Base where the XA-60-Ex stealth drones were being stored and controlled from. He declared that every major city around the U.S. would be going down in the sea of flames before battling the two V.S.S.E. agents, Giorgio Bruno and Evan Bernard.

During the battle, he utilized every type of a top-secret biological weapon, code-named "Terror Bite", against the V.S.S.E. agents in which they were able to neutralize them using their shotguns and machine guns. As Barrows retreated to the higher ground, he destroyed the upper part of the staircase that leads to the UCAV control panels. So, Captain William Rush of the Internal Surveillance Group's Special Operations Division ordered the National Guardsmen to form a man-made staircase for the agents to climb on.

After Barrows was defeated and killed by the agents, they then watched as the UCAVs had launched the nuclear missiles and Captain Rush gave the agents a desperate boost jump they needed to reach to the controls and pushed the "ceasefire order" buttons on the control panels that self-destructed all the missiles and signaled the UCAVs to return to Colorado Air Force Base. 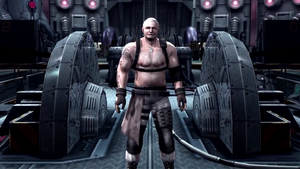 Barrows' evil grin.
Add a photo to this gallery

Retrieved from "https://villains.fandom.com/wiki/Gregory_Barrows?oldid=3889626"
Community content is available under CC-BY-SA unless otherwise noted.