Harry Potter and the Sorcerer's Stone

Assist Draco Malfoy in his plans.

Gregory Goyle is one of the Slytherin students who works with Draco Malfoy and a supporting antagonist in the Harry Potter franchise.

He was portrayed by Joshua Herdman.

Goyle and Vincent Crabbe are the friends and bodyguards of Draco Malfoy. The trio often pick on Harry, as well as Ron for his family being poor and Hermione for being Muggle-Born. Goyle was bitten by Scabbers once. In The Chamber of Secrets, Harry used Polyjuice Potion to impersonate Goyle and interrogate Malfoy.

Goyle is extremely unintelligent, even more so than Crabbe, neither of which passed their Defense Against the Dark Arts OWL. The one time he talks, during the confrontation in The Deathly Hallows, he is unable to pronounce "Disillusionment" and "Diadem" correctly. He is stunned during the Battle and is saved from Crabbe's Fiendfyre curse along with Malfoy by Harry, Ron, and Hermione. He is never seen again afterward and his fate after the Battle of Hogwarts is unknown. He may have survived and possibly arrested and sent to Azkaban for using the Cruciatus Curse on other students at Hogwarts, along with surviving Death Eaters and their allies.

Goyle has appeared in every film and in Harry Potter and the Deathly Hallows Part 1 only in the train scene, and has a few more lines than in the books. He and Crabbe appear as Malfoy's friends and bodyguards who like to bully non-Slytherin students, especially Harry, Ron, Hermione, and Neville. He almost failed his first year because of his grades.

In The Chamber of Secrets, Harry impersonated Goyle with Polyjuice Potion when he and Ron give him and Crabbe cupcakes Hermione put a sleeping draught into. As Crabbe and Goyle, Ron and Harry talked to Draco to find out what he knew about the Heir of Slytherin.

In The Prisoner of Azkaban, Goyle was absent for a few scenes as his actor Josh Herdman had injured his arm, and was replaced by Theodore Nott. The first was when Harry threw snowballs at Draco, Crabbe, and Nott, and the second was when Hermione punched Draco.

In The Goblet of Fire, when Barty Crouch Jr., disguised as Mad-Eye Moody, controlled a spider to jump on Draco, Goyle tried to smack him off. Later, when Barty turned Draco into a ferret and put him down Crabbe's pants, Goyle tried to get him out and withdrew his hands after a few seconds after he got bitten by the ferret.

In The Order of the Phoenix, Goyle and Crabbe bumped into Neville in the hall before he discovered the Room of Requirement. Goyle said "Which way are you going, Longbottom?" He also joined the Inquisitorial Squad alongside Malfoy and Crabbe. At one point, they and Filch tried to catch Luna as she entered the Room of Requirement, but as it was protected against them, they ended up crashing into a broom cupboard. When Fred and George set off fireworks in the Great Hall, one firework attacked Goyle, who swatted it away causing it to hit Crabbe instead. The Inquisitorial Squad later captured Ginny, Neville, and Luna for Umbridge, but Ron tricked them all into eating Puking Pastilles enabling them to escape the Slytherins.

In The Deathly Hallows Part 2, Goyle was seen alongside Blaise Zabini in the Great Hall, oddly missing Crabbe (who was written out of the films due to drug charges against his actor). As Filch was leading the Slytherins into the dungeons during the Battle of Hogwarts, Malfoy apparated into the dungeons and took Goyle and Zabini to the Room of Requirement as Harry was entering it. They confronted Harry, who tried to talk Malfoy out of working for Voldemort. Goyle, proving to be more evil than the dimwitted thug he initially seemed, told Malfoy to kill Harry and "don't be a prat" as the morally conflicted Malfoy hesitated to commit murder in spite of his nature. When Hermione disarmed Malfoy, Goyle tried to use the Killing Curse on her, causing Ron to run after him in a rage. Goyle cast Fiendfyre (cursed fire) in an attempt to kill him, while Malfoy and Zabini looked on in fear. Harry, Ron, and Hermione grabbed broomsticks to fly away from the fire while Malfoy, Goyle, and Zabini attempted to climb to safety on a mountain of hidden things. Goyle grabbed a loose chair and fell into the fire, but Harry, Ron, and Hermione were able to save Malfoy and Zabini. 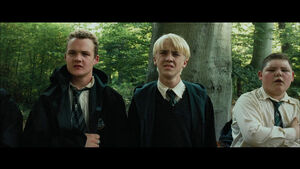 Goyle falls into the fire.