Gregory M. Wilson is one of the two secondary antagonists (alongside Diana) and the final boss in the 2006 psychological horror Rule of Rose. Gregory is the man responsible for the orphan massacre in 1930.

Gregory M. Wilson was once a kind and caring father, but became an ill alcoholic after losing him, who often attempted to kill himself. This doesn't mean, however, that Gregory became a monster: Gregory tried his best to take care of Jennifer, but was overwhelmed with his insanity and actually attempted to turned her into Gregory.

When brainwashed Gregory was a mindless, violent and absolutely unstoppable beast. Upon regaining sanity Gregory realized that what he has done was unforgivable and committed suicide.

Gregory is a man that lives in poverty. He does his best to give his son, Joshua, a happy life by spending time with him, by playing with him, or by letting him help with work around his farm. But thing took a dark turn in his life when Joshua fell ill to the point where he couldn't leave his bed. Gregory would do his best to care for him from then on.

After his son Joshua died from his illness, Gregory become unbearably heartbroken and began drinking heavily. His sad state has even lead him to become suicidal as he would often attempt to commit suicide by shooting himself in the head.

Eventually, Gregory found a young girl named Jennifer, who was the sole survivor of an airship crash her parents died in. Gregory decided to take her in as his own child. He treated her with kindness but Gregory soon started to treat her like she was his decided son Joshua. He had her dress in Joshua's clothing, sleep in the same bed as he did, and even read her the same stories that he wrote for Joshua.

Eventually, Gregory's obsession with trying to make Jennifer just like Joshua became too much for Jennifer to bear and she ran away to an orphanage with the help of Wendy.

Gregory fell into insanity and became more reliant on alcohol. Gregory was later turned into Stray Dog by Wendy. She used him as a tool to strike fear into the hearts of the orphans. Even Diana and Wendy feared him. One day, Martha Carol saw Wendy dog-training Gregory and reported it to the police, but before the police could do anything, Wendy brought Gregory to the orphanage and he killed everyone except Jennifer. He even turned on Wendy and shot her.

After his heinous actions, Gregory was able to snap back into sanity. But, unfortunately, it was too late as he had already done an unforgivable act of evil. In the end, he apologizes to Jennifer for all the pain he caused her and, out of remorse for murdering the orphans, he finally shot himself. 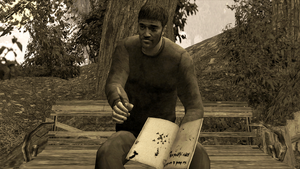 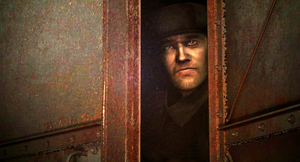 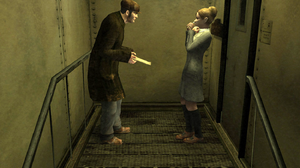 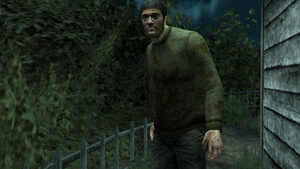 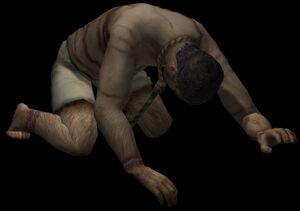 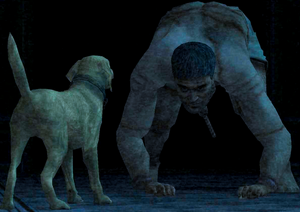 Gregory as he appears in Jennifer's mind.
Add a photo to this gallery
Retrieved from "https://villains.fandom.com/wiki/Gregory_M._Wilson?oldid=2684951"
Community content is available under CC-BY-SA unless otherwise noted.