Aid Axlerod in his plan to take over the world.
Kill Lightning McQueen (all failed).

Grem is a supporting antagonist in Pixar's 12th full-length animated feature film Cars 2. He is a Lemon who works as a top henchman for Professor Zündapp, who secretly works for Sir Miles Axlerod.

He was voiced by Joe Mantegna, who also played Fat Tony in The Simpsons.

Grem first appeared on the oil deck and as one of the Lemons who had thought to have killed Finn McMissile. He was next seen in Japan when he and Acer attacked Rod Torque Redline in the bathroom.

Rod then managed to pass along information to Mater (who happened to be there) regarding the conspiracy plot. Afterward, Grem tested Rod on an Allinol with the electromagnetic pulse camera that would be used to blow out the race cars during the World Grand Prix as demonstrated by Professor Z - who proceeded to kill Rod after Grem and Acer managed to obtain the information onto Mater.

Grem was assigned to use the camera on the race cars during the World Grand Prix. He aimed the camera beam at a racer and with the result of the Allinol heating up, blew out their engine. Grem and Acer also caused a big crash in Italy. After Mater, Finn and Holley tried to stop the Lemons, they were all captured. Grem was then assigned to kill McQueen using the camera but since Sarge and Fillmore switched out the Allinol with Fillmore's organic biofuel mixture, the camera beam did not work so properly.

When Mater discovered the bomb strapped to his radiator and McQueen chased Mater down to see what the situation was, Grem and Acer pursue them throughout London until Holley Shiftwell intervened and threw Grem and Acer off the road and into the Ye Left Turn Inn restaurant where they got beat up by cars bigger and stronger than them. It is completely unknown what happened to Grem and Acer afterward, but it is likely that in case they were not beaten to death by the car clients (as they were just angry albeit most probably without murder intentions), they were later taken in custody as the other Lemons. 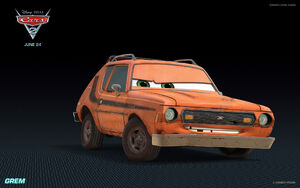 Grem about to charge at Redline

Grem & Rod struggling against each other

Grem & Acer ordering Mater to leave; not knowing that Rod secretly put the device containing the information on the Lemons' mastermind onto Mater.

Grem using the camera during the WGP race in Japan

Grem & Acer using the camera during the Porta Corsa race

Grem & Acer greeting a captured Mater as they prepare to use the camera on Lightning McQueen. 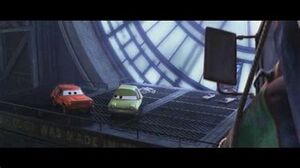 Grem & Acer telling Mater their "backup plan" which is to have a bomb go off at McQueen's pit when he makes a pit stop.

Grem & Acer preparing to go after McQueen & Mater after they escaped from the racing course which the bomb did not go off, thanks to Mater's rockets. 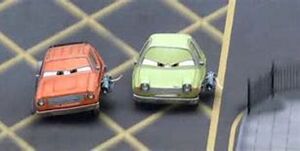 Grem & Acer getting their guns out to attack Mater & McQueen.

Grem & Acer's defeat
Add a photo to this gallery

Retrieved from "https://villains.fandom.com/wiki/Grem?oldid=3577488"
Community content is available under CC-BY-SA unless otherwise noted.