Destroy a school bus along with the riders (partially succeeded).

Bart has a nightmare where he is on the school bus and it crashes. He wakes up very paranoid the next morning. He and Lisa board the real bus to school. Principal Skinner is there to join them. During the ride, Bart looks out the window and sees a gremlin on the side of the bus. It starts to tear the bus open and flashes a manic smile at Bart. He first warns Otto who mistakes the gremlin as an AMC Gremlin car owned by Hans Moleman, which he promptly knocks away with the bus. Still worried, Bart looks out the window again. He sees the gremlin attempting to gouge the fuel tank. Bart becomes more scared and tells everyone there is a monster on the side of the bus. Everyone, including Skinner and Otto, look out the window. The gremlin hides and everyone assumes Bart is crazy. Annoyed, Skinner closes the curtain to the window. A moment later, tapping is heard. Bart opens the curtain to look for the gremlin. Instead, he sees Groundskeeper Willie who boards the bus claiming to need a ride. As the ride resumes, the gremlin removes the bolts from the wheels. Even more desperate, Bart warns the entire bus again. This only annoys Skinner again and prompts him to tie Bart to the seat. Milhouse, Bart's friend, switches seats with Üter. Bart manages to convince the German foreign exchange student to untie him. Finding emergency flares, he takes one and opens the window. He tries to use the flair to stop the gremlin. As Skinner and the Willie pull Bart back inside, he throws the flare at the gremlin. It falls off the bus and is then found by Ned Flanders. When the bus arrives at school, it falls apart after everyone gets off. The severe damage is noticeable. Although Bart claims to be right, he doesn't have an alibi to support him. As a result, he is taken to New Bedlam Insane Asylum for being deemed insane and his disruptive behavior. Skinner claims that Bart spending the rest of his life there will teach him manners. During the drive, Bart feels relaxed to not worry about the gremlin anymore. Suddenly, he is interrupted by the gremlin appearing at the back window of the ambulance. It holds Ned's decapitated head which says "Hey-Diddly-Ho, Bart!". Bart screams uncontrollably as the camera moves towards his open mouth.

Gremlin tearing the side of the school bus. 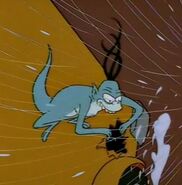 Gremlin tearing the rear of the school bus.

Gremlin sabotaging a wheel on the school bus.