The Wing Gremlin
The Nightmare at 20'000 Feet

Nightmare at 20'000 Feet by Richard Matheson

Humanoid Monster
The Gremlin is the main antagonist from the short story Nightmare at 20'000 Feet by Richard Matheson and its subsequent adaptations in The Twilight Zone series, as well as the 1983 film adaptation Twilight Zone: The Movie. It is considered by many to be one of the most famous monsters to come from the show alongside Anthony Fremont and Talky Tina.

He was portrayed by the late Nick Cravat in the 1963 series, and Larry Cedar in the 1983 film.

In the original short story, Bob Wilson boards a DC-7 plane to Los Angeles. The gremlin soon lands upon the wing of the plane as witnessed by Wilson, whom he first mistakes the creature for a cat or dog, then later a man "whose clothes have been ripped off by the terrific winds". The gremlin soon notices that Wilson has seen it and vanishes from view as Wilson summons a stewardess to view it, leaving the woman to think that he has gone crazy. Once the woman has left, the creature begins to torment the nervous man, pressing its face against the window in an effort to terrify him. The gremlin then returns to the wing of the plane and begins to tear apart the wing's engine much to Wilson's horror. Once again the creature vanishes when Wilson summons both the stewardess and the pilot. It then resumes to tear apart the engine, causing it to briefly falter. Taking matters into his own hands, Wilson removes his handgun from his bag (which he had brought in case he wanted to commit suicide), secures himself tightly and throws open the planes side door. Partially sucked out of the plane, the gremlin then notices Wilson as the man opens fire on it. One of the bullets manages to wound the creature just as it lunges towards Wilson, slashing Wilson's face. Mortally wounded, the creature is then blown off the wing of the plane, carried away by the winds like "a paper doll swept in a gale".

Bob Wilson is a salesman on an airplane for the first time since his nervous breakdown six months earlier. He spots a gremlin on the wing of the plane. Every time someone else looks out the window, the gremlin leaps out of view, so nobody believes Bob's seemingly outlandish claim. Bob realizes that his wife is starting to think he needs to go back to the sanitarium, but also, if nothing is done about the gremlin, it will damage the plane and cause it to crash. Bob steals a sleeping policeman's revolver, and opens the window marked "Auxiliary Exit" to shoot the gremlin, causing it to fall off the wing to its death, despite the fact that he is nearly blown out of the plane himself. Once the plane has landed, although he is whisked away in a straitjacket, a final shot reveals evidence of his claims: the unusual damage to the plane's engine nacelle—yet to be discovered by mechanics.

The 1983 film version is much more faithful to the original short story with some slight variations such as the renaming of the main character from Bob Wilson to John Valentine.

The gremlin is first witnessed by John Valentine as it crouches on the wing of the plane before it's struck by a bolt of lightning, which doesn't seem to faze it. As Valentine tries to point out the strange creature to the other passengers, it hides itself from view underneath the wing of the plane. Realizing that someone has seen it, the creature then begins taunting Valentine, terrifying the already nervous man by pressing its face against the window, which makes Valentine have a panic attack, before once again hiding from view as the other passengers look out the window in an attempt to see it. After Valentine manages to calm down, it resumes tormenting him as it begins tearing apart the wing's engine, holding up a piece of wing and demonstratively tossing it inside the engine to damage it. When Valentine tries to shoot the gremlin, it runs over the wing to Valentine, grabs his hand holding the gun, and promptly bites the gun in half. At that moment the lights of the landing field appear below. The gremlin grabs Valentine's face, seemingly about to kill him, but simply admonishes him for spoiling its fun by waving its finger in a dismissive "tut-tut-tut" manner. Valentine then watches as the creature then leaps from the plane floating (or flying) away on the wind, disappearing into the night sky.

In Matheson's original short story the Gremlin is described as being a blackish, human-sized being with grimy skin "of a wide-pored coarseness", and covered in tangles hair sprouting in tufts from its ears, nose, and down its cheeks. The face is described as having a short, discolored lump of a nose; twisted lips that were forced apart by large, crooked teeth; and small, unblinking eyes set in sunken eye sockets. It has thick legs and long, taloned hands which it uses to slice open planes with.

The 1963 television adaption of Matheson's short story featured a very similar description, with some alterations. In this version, the Gremlin is covered from head to toe in short curly fur, and had a dark face with a highly arched upper lip. This version was very much bipedal as opposed to the more crawling movements of the film version.

The 1983 film adaptation radically redesigned the character, making it a lean, long-limbed creature with long black tendril-like hair jutting from the top of its head down its back. It's face has large, amber-colored eyes; a small, flat nose; and a grimacing mouth filled with razor-sharp teeth. It's hands contain five digits tipped with razor-sharp talons which it uses to tear apart metal; pieces from the plane. While moving around on the wing of the plane, the gremlin crawls around on all fours, although when it flew away from the plane, it ran on two feet.

In Matheson's short story and its subsequent adaptions, the gremlin displayed both the ability to fly or glide in the sky without any obvious means. It is also shown to be able to withstand the enormous pressure generated by the plane's altitude and forces generated by the plane's extreme speeds; remaining firmly attached to the wing of the plane. Its long talons are shown to be sharp enough to tear through metal.

In the film adaption, the gremlin is shown to be incredibly durable, able to withstand a direct hit from a bolt of lightning without any signs of being fazed by the enormous amount of electricity. The film version of the character was also shown to be incredibly fast, and agile, easily dodging bullets fired at it; and having razor-sharp teeth that are capable of shredding through metal as demonstrated when it bit Valentine's gun in half.

Both the original short story and the film version of the character is shown to be malevolent in its intentions to sabotage the plane. It's also shown to be somewhat sadistic in its behavior towards the main protagonist, tormenting him multiple times by revealing itself to the already nervous individual before vanishing when they try to get someone else's attention. The film version was shown to be even more sadistic, taunting Valentine with the knowledge that it was going to crash the plane by tearing off multiple pieces of the wing and waving them at the horrified man before tossing them into the wing's engine. The gremlin also seemed to take particular pleasure in sabotaging the plane and tormenting Valentine, and was visibly frustrated with Valentine to the point that it considered killing him for interfering. However, for reasons unknown (perhaps amused or impressed at his attempt to attack it) it decided to spare him, waving its finger at him in a scolding manner before departing from the plane. The gremlin is also shown to be extraordinarily intelligent, able to understand Valentine's intention to prevent it from crashing the plane as well as understanding the mechanical function of the plane itself. Its final gesture, wagging its finger at Valentine the way one would scold a naughty child, demonstrates that it has some knowledge of human communication.

The 1963 television version of the character was much more toned down from the original story, characterizing the creature as being more curious in nature. It's "sabotage" of the plane's engine driven more by an animal-like curiosity rather than a malevolent intention to destroy the plane. However, it does charge at him when he attempts to shoot it, and takes a defensive stance in an attempt to block the bullets. 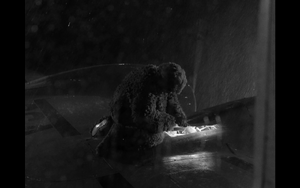 The original version of the Gremlin. 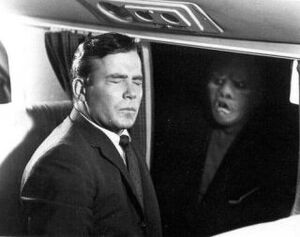 The Gremlin as it is struck by lightning. 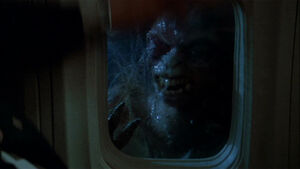 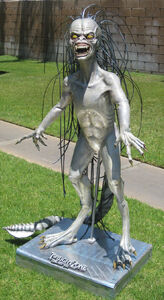 Full model of the character 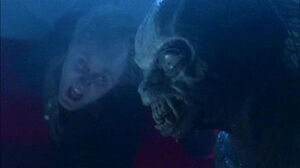 The Gremlin staring at the airport landing.