Multiply and propagate.
Take over human civilization (stated by Brain Gremlin; failed).
Kill Batman and his gang (in The Lego Batman Movie; failed).

The Gremlins are the titular primary antagonists of the popular film franchise of the same name. They are based very loosely on the mythological creatures said to vex aircrafts. These monsters were notable for being mischievous and chaotic, obsessed with destruction and cruel practical jokes. They are largely unknown reptilian goblin-like creatures.

The Gremlins also had a primitive social-structure with more cunning and vicious members gaining higher rank via bullying or outright murder - the most powerful of the Gremlins in the original film was the manipulative but deadly "Stripe".

In the second film, due to genetic-engineering, a number of other unique Gremlins were "born" - amongst them was the Brain Gremlin, who was stereotypically civilized yet also brutal in his methods: becoming a spokesman of sorts for his kind.

Although almost universally dangerous and corrupt, Gremlins actually have a fairly innocent beginning as the furry critters known as mogwai, when a mogwai becomes wet or is fed after midnight, a Gremlin is born and their physiology and behavioral patterns alter dramatically.

Gremlins are also somewhat carnivorous and bloodthirsty, though in general Gremlins are not out to devour human flesh - they much prefer to raid human homes and stores for sweet foodstuffs such as candy or cookies. Other foods they enjoy to eat are chicken legs, frozen yogurt, and a sandwich with ham, cheese, and lettuce.

Gremlins do love destruction though and will happily tear apart electrical equipment, hijack vehicles and ambush people - attacking them with their sharp teeth and claws.

The Gremlins' main weakness is exposure to direct sunlight, which causes them to melt into puddles of goo and kills them in the process - for this reason, both Gremlins and Mogwai are naturally scared of bright lights.

A gremlin is the last stage of the Gremlin life cycle which goes from Mogwai-Cocoon-Gremlin. It is said that the gremlins are considered to be an unwanted side-effect from when the Mogwais were created on a faraway planet to be used as ambassadors of peace on other planets. They are about one meter tall and they have scaly reptile-like skin, large bat-like ears, three sharp claws on their feet and hands and equally sharp teeth. And they also have a small tail, and color may vary; which can be in either various shades of green, brown, and black. Their intelligence and strength vary and they are all very mischievous, violent and fun loving. They are capable of working (and sabotaging) complex machinery and devices, as apparent in folklore where they were believed to have brought down hundreds of planes. No gremlin has so far proved to be good-willed and nice and most of them don't seem to regard the life of their fellow gremlins, sometimes even killing or beating others for fun. Even though they are dangerous and fun loving they don't seem to hurt any human who are not afraid of them (example: when Grandpa Fred was doing an inside scoop of what was happening inside the building, not a single gremlin behind him laid a finger on him). Also in the deleted scenes when Grandpa Fred was doing his section George, Lenny and Daffy were present but didn't try to scare or hurt him, rather joining him for fun. (Even Evil Has Standards)

Mogwai evolve into gremlins by eating after midnight. It would appear that mogwai are aware of this as many show to be determined to eat after midnight. Even after their metamorphosis, gremlins still retain traits they had as mogwai, such as their dislike to bright lights and their vulnerability to sunlight and most dangerously their ability to multiply upon getting wet. Unlike the mogwais, where small furballs that pop out from their backs and quickly inflate to turn into new mogwais, the backs of the wet gremlins get riddled with big blisters that contain small gremlins that rather quickly break free and starts to grow. The gremlins that are giving birth to new gremlins are often more vulnerable than other gremlins because the birthing process is often painful for the creatures. Afterwards, they continue to live as if nothing happened, often along with the newly born gremlins that have quickly grown to full gremlin size.

Stripe is a gremlin from the first Gremlins film and is Gizmo's archenemy. He is the primary antagonist of the film. Even as a mogwai, he was extremely cruel, mainly to Gizmo and the family dog Barney. He was the leader of the gremlins. He was killed when Gizmo exposed him to sunlight, which was deadly to gremlins.

Gremlins are among the Phantom Zoners in The Lego Batman Movie. 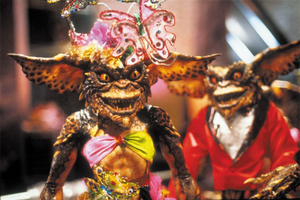 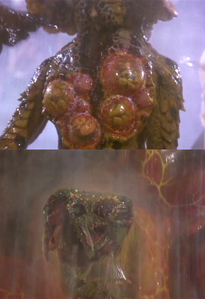 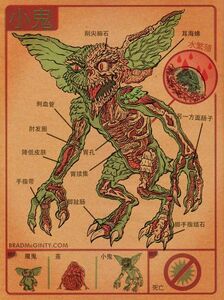 Gremlin anatomy
Add a photo to this gallery 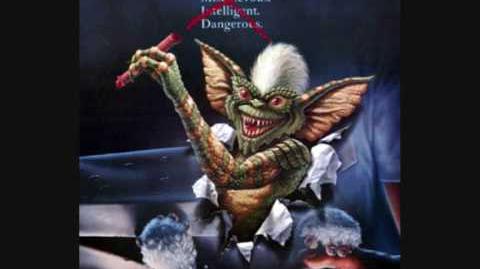 Retrieved from "https://villains.fandom.com/wiki/Gremlins_(Gremlins)?oldid=3756571"
Community content is available under CC-BY-SA unless otherwise noted.