Turning things from his imagination into reality
Life creation

Aid Wandenreich in their goals.

Gremmy Thoumeaux is an antagonist featured in Bleach. He is a member of the Wandenreich's Sternritter with the designation "V" - "The Visionary" by Yhwach.

Gremmy Thoumeaux is a young man with disheveled hair, he wears a military uniform with a hooded raincoat, his actual form was that of a brain engrossed.

Gremmy Thoumeaux had a highly sadistic personality maintaining an affable posture with both allies and rivals, in his fight with Kenpachi he threw a meteorite in an attempt to exterminate the entire battlefield something that did not happen.He brutally dismissed Guenael Lee, an old man who was his product of imagination.

Gremmy Thoumeaux makes his appearance when he makes disappear part of the shoulder that extends towards the chest of Gwenael Lee, an artificial human, after receiving a blow from Yachiru Kusajishi, Guenael Lee very surprised says that it cannot be, I did the best I could then Gremmy He affirms it by saying that he did the best he could, my product of my fantasy, so Isane is surprised to hear the fantasy; Guremi praises Guenael's ability and at that moment Gremmy tells her that he has already disappeared from his memory so Gwenael, furious at that comment, tries to attack him but at that moment Guenael's body explodes causing blood to splash all over the room. what Isane very annoyed and irritated tells him to stay away from the beds where the wounded captains Kensei Muguruma and Rōjūrō Ōtoribashi lie, but Gremmy tells Isane that there is no need to continue talking about it, he has already killed them, surprising the lieutenant who does not hesitate to run to help them finally. Isane confirms what the Sternritter said. Then Yachiru attacks him but the Quincy easily dodges him and takes the hand with which Yachiru was holding the handle of the Zanpakuto at that time Kusajishi's arm is broken then Gremmy explains what would happen if what is in your arms were nothing more than cookies and He also tells him that right now he is thinking that they are broken, it is not like that, then Yachiru is surprised but Gremmy continues commenting and explaining what Yachiru also imagined so he tells him if the bones of my arm are made of cookies, everything else of my bones are made of biscuit and at that moment the bones of his hand are also fractured so Guremi looks at Yachiru who is on his knee very scared so the Quincy tells him that the most powerful force in the world is the imagination at that moment Behind Guremi is an explosion that had been generated by Zaraki Kenpachi who was looking for Yachiru 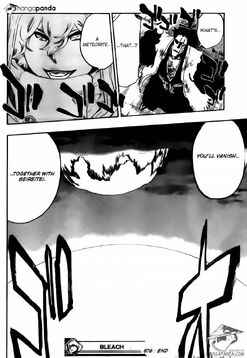 The field begins to alter, raising the rubble that Kenpachi left after making an appearance in the battle falls sharply to the ground, while Gremmy tells Kenpachi that the stage is ready, After revealing himself as the true Sternritter V, Gremmy claims to be the most powerful Sternritter. After those intimidating words Kenpachi only responds with a curt "Really?" and proceeds to attack him, he realizes that his attack is stopped in his tracks, To the Sternritter's surprise, Kenpachi manages to cut off part of his shoulder, stating that in his imagination there is nothing that he cannot cut since he is, Kenpachi. Gremmy notices how the Shinigami give encouragement to Kenpachi since they think that the battle is already decided, while Zaraki notices how the wound that the Quincy had on his arm disappears so the Captain asks him if he can heal then Gremmy Very smiling he tells him that maybe yes, because you said that he has healed it probably happened and then the Quincy begins to explain to him that I only had to imagine that the wounds they made had to heal, all he did was imagine it right away he begins to bragging about his ability and telling Zaraki that someone like him would never understand his power and also adds not to fight him with a single finger but to use his imagination to rip his head off. Immediately Gremmy begins to imagine lava to direct it to Kenpachi who with his sword manages to block it but when he sees Yachiru near him he tells him to move but the Quincy tells him that he must be understandable with her since thanks to his power his bones are made of cookies but to be more understandable to Zaraki he tells him that he should have done it as rakugan, when he understands this Zaraki launches himself to the attack but is trapped in a huge bucket of water, then Gremmy happily tells him that if he was thinking of jumping through the air but you just did in the water however this is not an impediment for Kenpachi who uses his Zanpaku-tō to attack Gremmy but does not manage to do him any damage, the Quincy tells him that being suddenly wrapped in water will certainly make his mind doubt. Zaraki manages to destroy the iron block that protected Gremmy with a single cut, but the Quincy manages to dodge the attack with ease, according to Askin Nakk Le Vaar, his Majesty was the one who chose Gremmy to face Kenpachi.

Shocked by it, he decides to use something without form, delighting in how he would die being exposed to space, but Kenpachi attacks him,. When Gremmy cuts him and the bodies begin to explod, Kenpachi remains impassive but burned asGremmy gets excited and increases his muscles, but Hhe exploded the limit of his ability and his muscles explode. Finally acknowledging his defeat and the desire to win that fight, Gremmy decides to nullify his powers of imagination, dying in the process.

The Visionary (夢想家(ザ・ヴィジョナリィ), 'Musōka (Za · Vijonarii)' ?, lit. Dreamer, Spanish for The Visionary): It is Gremmy's Ability referring to his lyrics. The skill is to turn the entire illusion into reality. He can imagine whatever and this will come true as he did to avoid being cut by Zaraki Kenpachi imagined that his body was stronger than steel.

My Other Self (ム イ ・ オ ト エ ル ・ セ ル ッ フ, Mui oto eru seruffu?, English for My Other Self): With this ability Gremmy Thoumeaux doubles in which he shows his authentic self, and also the power of his imagination is doubled in addition to none of his selves he can die or be pierced.