Throw as many grenades at other Klaymen as possible (failed).

Gregory, also known as Grenade Gregory, is the titular main antagonist of Klay World: Grenade Gregory. He is a soldier that seems to enjoy throwing grenades at any Klaymen he sees.

He appears to be an avenge Klayman, only wearing military helmet and belt with grenades.

Nothing is known about Gregory's life, other than at some point, he became a soldier, but then later he becomes a mass murderer, sadistically throwing grenades and killing other Klaymen.

As seven Klaymen was betting on three squares, Gregory walks up to them and threw a grenade at one of them, killing the better. Gregory carries out his brutal rampage, resulting in the killing of at least five Klayman. As Gregory was preparing to kill the last two Klaymen, a police officer confronts and attempted to apprehend the soldier. However, the police officer didn't realize that Gregory just activated the last two grenades, killing both him and the officer, the two last Klaymen became survivors of Gregory's attack. 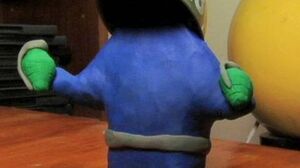