Putting an end to loud partying in the great hall.

Grendel is a vicious, aggressive, bloodthirsty, and dangerous monster who appears in Danish poem Beowulf, as one of the three main antagonists alongside mother and the dragon. He lives in a subterranean cave with his mother, rampaging through the kingdom of Hrothgar.

Grendel is described as a 'fiend from Hell', enraged from the laughter and merry-making coming from the Hrothgar's meadhall, and goes on a terrible and destructive rampage, slaughtering and eating 50 of the kings warriors on the first night. This goes on for the next 12 long and bloody years, with nobody being able to stop Grendel. Eventually, King Hrothgar tires of this, so he sends for a champion to final rid him of the monster. The mighty Thane warrior Beowulf and his men are eventually called upon and sent to the kingdom.

Once they arrive, they make merry in the meadhall to get Grendel's attention. Later in the night, Grendel sneaks in and begins eating Beowulf's men. Unfortunately for him, Beowulf had been waiting for him and when Grendel tries to eat him, Beowulf grabs him by the wrist and they begin to fight. A horrific battle ensues, climaxing with Beowulf ripping off Grendel's arm at the shoulder socket. Grendel retreats to his cave where he bleeds to death in his mother's arms, having just enough life left in him to tell his mother the name of the man who killed him. She later confronts Beowulf for revenge.

His most famous media portrayal was in the rendered 3D motion capture film directed by Robert Zemeckis, where he was played by Crispin Glover, who also portrayed Thin Man in the Charlie's Angels film series, Stan Bittleman in Like Mike, Willy Wonka in Epic Movie, Fifi in Open Season, and the Knave of Hearts in Alice in Wonderland and Through the Looking Glass. He is portrayed as King Hrothgar's illegitimate son after an affair with his mother. Essentially in this version, he is a very thoughtful and sympathetic villain because he is an outcast. When not attacking the Danes, he is shown as a timid and quiet creature that speaks in Olde English around his mother. The reasons for his attacks are due to having hyper-sensitive hearing from an exposed eardrum, and the racket from the meadhall was causing him physical pain. Despite being more sympathetic, his fate is still the same as in the poem. Beowulf slams the door into his arm with enough force to take it off, and hang it over the meadhall door.

The philosophy professor Stephen T. Asma argued in the December 7 issue of the Chronicle of Higher Education that, "Zemeckis's more tender-minded film version suggests that the people who cast out Grendel are the real monsters. The monster, according to this charity paradigm, is just misunderstood rather than evil. The blame for Grendel's violence is shifted to the humans, who sinned against him earlier and brought the vengeance upon themselves. The only real monsters, in this tradition, are pride and prejudice. In the film, Grendel is even visually altered after his injury to look like an innocent, albeit scaly, little child. In the original Beowulf, the monsters are outcasts because they're bad (just as Cain, their progenitor, was outcast because he killed his brother), but in the newer adaptation of Beowulf the monsters are bad because they're outcasts [...] Contrary to the original Beowulf, the new film wants us to understand and humanize our monsters."

The Australian animated film Grendel, Grendel, Grendel, is based on John Gardner's the story, told from Grendel's point of view. The film shows how the events weren't his fault, and were mostly to blame on the greed and aggression of the humans. He is voiced by the late Peter Ustinov. He was a highly intelligent being, possibly smarter than the humans living in his time period. He questioned the purpose of his existence, and was very philosophical, reflecting on the humans and hating them, but secretly wishing he was one of them.

In The Wolf Among Us, Grendel is a fable that lives in Fabletown located in New York City. He is very ill-tempered, argumentative, impatient, and tired of being treated like a second rate citizen. He sees the establishment of Fabletown as corrupt and only interested in the rich, and he aims these frustrations mostly at the sheriff of Fabletown, Bigby Wolf, otherwise known as the Big Bad Wolf. Grendel serves as an antagonist in the first episode of the Wolf Among Us.

Grendel's personality varies in each interpretation. In the original poem, he was the descendant of the biblical Cain and found Hrothgar's Christian celebrations personally offensive. An obvious sociopath, he murdered the party-goers and brought them back to his lair to share their corpses with his even more dangerous mother. Little is known about what exactly he is, but is described as vaguely man-shaped, warped, unnatural, and coated In both scales and barbs. He also has thick claws made of an almost indestructible material.

In the 2007 movie, he appeared as an enormous troll-like being with a very lean, lanky, almost emaciated appearance and to top it off, appeared to suffer numerous physical deformities. His skeletal structure made him appear to suffer from neurofibromatosis (A condition Joseph Merrick, also known as the elephant man, was afflicted by), and horribly tight-fitting skin that appeared to be ripped and have massive patches missing from it. Understandably, this incarnation was as pitiable as horrific, and he would often scream during his rampages and appeared to have a chest infection and suffer laboured breathing. He had golden scales but had shed most of them either due to disease or stress from his torment. He also had in place of his ear an enormous eardrum which meant loud noises caused him agony. His face also resembles the famously inbred Charles the || of spain, with an enormous forehead, long nose, and underbite, and his hairstyle resema George Mcfly's from the back to the future series. But his most horrifying trait is his monstrously disfigured left hand, which has both index and middle fingers conjoined together, a non-existent ring finger and a small pinky finger. His personality was a timid recluse who attacked as revenge for the pain the warriors inadvertently inflicted on him and despite his torment, he genuinely enjoyed maiming, devouring, and even drinking the blood of his victms. As he falls asleep he whispers "killing" repeatedly suggesting he is indeed genuinely evil. Despite this, he is also a coward and tries to shrink in size and flee if attacked by a more powerful foe. His powers are stealth which helps him travel silently to his victims due to his hypersensitive hearing, teleportation via a blue flame, and agility, as he can leap incredibly high and run relatively fast. Despite his strength being sufficient to rip people apart, it has limits. He struggled slightly to rip an armoured soldier in half, and sprained his wrist when he smashed the mead hall doors down. 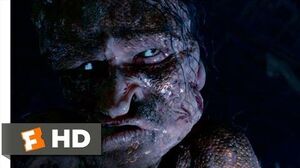 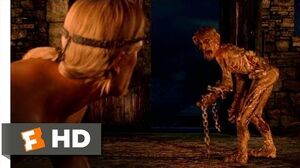