Marry Peter and kill Lois if she will hinder her (failed).

Gretchen Mercer is the main antagonist of the Family Guy episode "Take a Letter". She is a former girlfriend of Peter Griffin who is obsessed with getting him back.

When Lois takes a job with the postal service, she finds a letter in the dead letter bin from Peter that was never sent to Gretchen, dated a week before their marriage and personally delivers it to see what it may contain. She is told that Peter was simply happy to be getting married. Gretchen shows up at the Griffin home and reveals that the letter really said that Peter had doubts about his impending marriage and she pressures him to start their relationship again at the risk of her informing Lois of the letter's true content.

While they are out for coffee, Peter tries to explain that he really loves Lois and Gretchen seems to accept this with the condition of a final concert date. However, Peter continues to feel guilty, but when he leaves, Gretchen's mood changes. At the post office, Lois hears noises and then Gretchen texts Peter about solving their problem. Meg interprets this for Peter, informing him that Gretchen is a psycho, and he rushes in to the post office as Gretchen pulls a gun on Lois. She reads the letter at Gretchen's insistence and he explains about being scared of her and her family.

However, Lois is still angry and seems to give up, but when Lois steps away, Gretchen starts to move toward Peter and Lois decks her, explaining that she faked it to get her to drop her guard. Lois admits that she was scared about their wedding too, but she loves Peter as well and is happy about their lives. It is currently unknown what happened to Gretchen afterwards, but it can be heavily implied that she was arrested offscreen for trying to kill Lois. 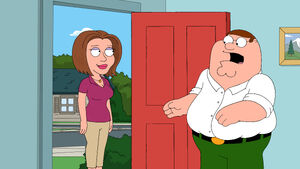