Killing people and harvesting their parts.

Kill Alita and sell her parts for Nova (failed)

Grewishka is the secondary antagonist of the 2019 film Alita: Battle Angel. He is a cyborg mercenary working for Nova.

He was portrayed by Jackie Earle Haley, who also played Rick Mattox in the remake of Robocop, Freddy Krueger in the remake of A Nightmare on Elm Street, Rorschach in Watchmen, and Odin Quincannon in Preacher.

While Dr. Ido was a Hunter Warrior, Grewishka used a female cyborg to lure Ido into a trap. Grewishka and his two companions then ambushed Ido and found that he had been accompanied by his newest cyborg Alita. Alita attacked Grewishka's two henchmen as Grewishka chose to stay back and watch how the cyborg did against his minions. To his surprise, Alita was able to kill both of them, prompting Grewishka to toss off his cloak and take her on personally. Alita manages to fight him off too and cut off his arm, prompting Grewishka to make an escape down a hole.

Grewishka later approaches Chiren in her apartment and asks to be rebuilt. As Chiren was working on Grewishka in her lab Vector walks in and asks what she is doing. Grewishka tells what happened to Vector and how he was beaten by Alita before Nova takes control of Grewishka and orders Vector and Chiren to repair Grewishka and send him to kill the Alita once more.

After being repaired and upgraded, Grewishka breaks into the Hunter Warrior bar to seek revenge against Alita. A dog Alita befriended starts barking at him so Grewishka kills it in cold blood, angering Alita. After painting her cheeks with the dog's bood, Alita then attacks Grewishka, leading to a fight that takes them both underground. Grewishka manages to slice Alita up with his bladed fingers, leaving Alita with only her head, torso and left arm still attached together, but Alita refuses to give up and punches his eye with her remaining hand, damaging it. Ido, Hugo and the Hunter Warrior McTeague then appear to back up Alita, with McTeague chasing him away with his four cyborg-dogs.

When Alita attacks Vector's building to get revenge on him for making Hugo go out and murder cyborgs, Grewishka breaks in to fight her one more time, but Alita quickly kills him by cutting him in half with the Damascus Blade. 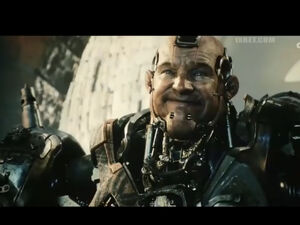 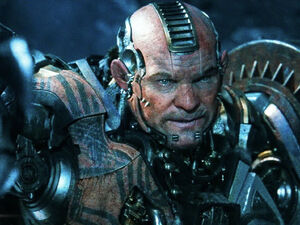 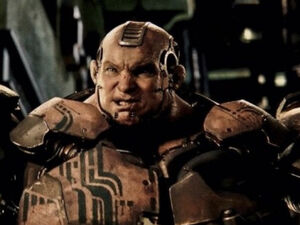 Grewishka introduces himself to Alita.