Leader of the Fancy Feast Council

Zapping people with his magical abilities.

Sink the economy and blame it on President Black Cat.

Get Mittens 2.0 elected.
Hold onto his wealth.

The Grey Cat is one of the main antagonists (alongside Blinky) of the YouTube series Politicats. He is the head of the Fancy Feast Council, and his goal is to get Mittens 2.0 elected. He is also the apparent father of Wonky. His true name is never revealed in the series.

Grey Cat is first seen using his powers to take away one of the Se-Cat Service pairs' lives as punishment for losing Black Cat. He then asks the Scientist Cat how Mittens 2.0 is coming.

After seeing that Black Cat's Operation: Lucky Cat is redistributing their Chinese money to the people, Grey Cat becomes angered.

Grey Cat later puts out a campaign ads for Mittens 2.0. After seeing Black Cat's ad, he puts out another accusing the president of being a Martian Muslim.

Grey Cat attended the presidential debate between Black Cat and Mittens 2.0. When Black Cat starts to get the upper hand in the debate, he yells at Wonky to do something. Wonky presses a button that causes Mittens to fly through the roof.

Grey Cat later kicks Wonky out of the council as punishment for his screw-up. by the Grey Cat. When the female Fancy Feast cat suggests they pass out Schrodinger's Box, he becomes angered and chokes the Scientist Cat. However, the Scientist Cat explains that they can use the box to make the cats whatever they want them to be, prompting the Grey Cat to let him go and open up to the idea.

Grey Cat later discovers along with the rest of the council that Mittens 2.0 has began replicating himself. When he finds that a sentient Cat Painting is currently controlling Mittens, he orders the painting destroyed. However, he holds off when the Cat Painting informs them of another world the council can go to.

Grey Cat later agrees to the Painting's idea when the Martian Armada attacks Earth and starts an all-out global war. He asks if they should wait for the Scientist Cat before taking off, with the Painting telling him that they have no need for him.

Grey Cat and the Painting eventually arrive on the planet. Grey Cat becomes angered to find that it is a barren wasteland and accuses the painting of lying. However, the painting directs Grey Cat to his "servants", a group of turtle cats, before fading away and leaving Grey Cat on the planet. 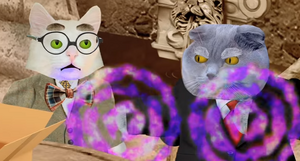 Grey Cat using his powers to choke the Scientist Cat
Add a photo to this gallery
Retrieved from "https://villains.fandom.com/wiki/Grey_Cat?oldid=4084165"
Community content is available under CC-BY-SA unless otherwise noted.