Turning everything into stone.

Destroy the Avengers and anyone that gets in his way (ongoing).

The Grey Gargoyle (birthname Paul Duval) is a supervillain from Marvel Comics and a recurring antagonist of the Mighty Thor and Iron Man. The Grey Gargoyle first appeared in Journey into Mystery #107 (Aug. 1964) and was created by Stan Lee and Jack Kirby.

Paul Pierre Duval is a French chemist who courtesy of a chemical accident gains the ability to turn any living creature to stone by touching it. Turning his body to stone, Duval dons a mask and cape and becomes a criminal with the alias the Grey Gargoyle. Duval, however, becomes bored and decides to try to achieve immortality by confronting the god of thunder Thor and stealing his mystic uru hammer, Mjolnir. Thor is turned to stone in their first battle, but turns back to Donald Blake when he falls over and strikes the floor with his hammer. As Blake he defeats the Gargoyle by luring him into the Hudson River in New York City, using a projection of Thor, leaving the villain buried at the bottom. The Grey Gargoyle eventually reappears after being hauled up from the river, whereupon he turns to stone two people examining him. Thinking the surgeon Donald Blake, who has just had the power of Thor removed from him, can help him find Thor, the Grey Gargoyle goes after him. He pursues him through the streets, becoming angry at Blake escaping him and finally deciding to eliminate Blake. However he is delayed by an Asgardian blinding him with an arrow that gives off light, after which the Asgardian restores the Thunder God's power. The Grey Gargoyle is incapacitated by Thor once again as he uses his hammer to trap the Grey Gargoyle by tapping a lamppost as a power source and sending a bolt which fuses the Gargoyles limbs. Odin then fully restores Thor's powers.

During an experiment, Paul Duval spilled an unknown organic chemical compound on his right hand, causing a mutagenic reaction that permanently transformed the hand into living stone. As a result, Duval can turn any living being touched with his "stone" hand to solid stone, with the effect lasting for approximately one hour.

Duval can also use the effect to transform himself into a being of living stone with no loss of mobility possessing superhuman strength and durability and able to lift approximately 20 tons.

Duval is also a expert chemist. 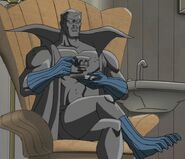 Retrieved from "https://villains.fandom.com/wiki/Grey_Gargoyle?oldid=3558882"
Community content is available under CC-BY-SA unless otherwise noted.