The Grey Werewolf is a minor antagonist in the 2004 dark fantasy horror action film Van Helsing. It was a feral servant of Count Dracula and was responsible for infecting Prince Velkan Valerious with lycanthropy.

At some point, the Grey Werewolf was infected and had to serve Dracula since it was permanently stuck in wolf form. Count Dracula sent the Wolf Man after the Valerious siblings and their crew to eliminate them as they were a threat to his plans. Velkan used himself as bait in order to lure the Grey Werewolf into a trap. As the Wolf Man was caught in a cage, the other hunters began firing at it and Velkan lost his pistol which contained the silver bullets that would end the beast's life. While the trap succeeded despite some difficulties, gunfire from the hunters inadvertently set it free from the cage.

After busting out, the Wolf Man set its sights on Princess Anna Valerious and chased her through the woods. As Anna ran to the edge of the cliff, the Grey Werewolf leaped up into the air towards the Princess, but Velkan appeared last minute and pushed her out of the way and shot the Wolf Man with a silver bullet. However, the Grey Werewolf managed to tackle Velkan with both plummeting off the cliff and into the river. The Wolf Man died and was freed of its curse but it passed it onto Velkan by biting him and turned the latter into another Werewolf. 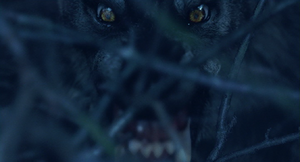 The Grey Werewolf hides behind some bushes before attacking. 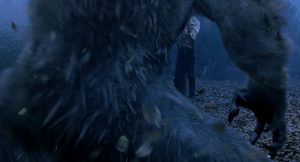 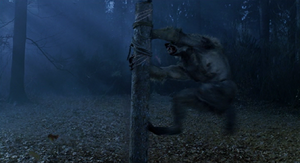 Velkan vaults himself onto the top of the post just as the Wolf Man slams onto it, just missing him. 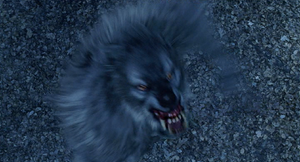 Out in the clearing, Grey Werewolf snarls up at Velkan and lunges at him. 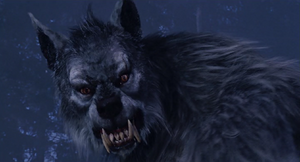 Princess Anna Valerious charges out of the bushes and the Wolf Man turns seeing her. 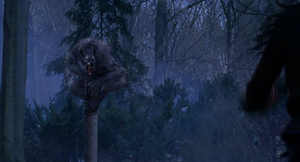 Grey Werewolf snarls viciously and jumps off the pole, and immediately falls through a camouflaged mesh covering the ground. 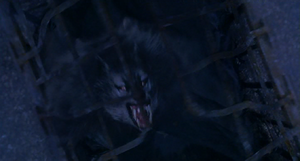 The Wolf Man is caught in a huge iron cage and the roof of it springs shut, trapping the beast inside. 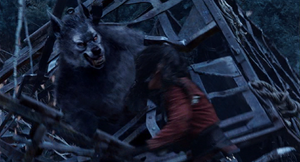 The cage suddenly slammed down right in front of Anna and the Wolf Man bursts out. 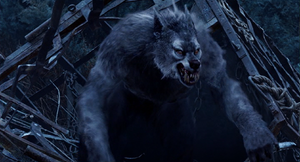 Wolf Man bursts out of the smashed cage who spots Anna running away and gives chase. 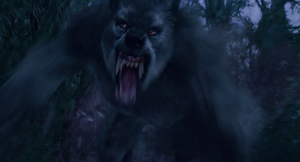 Anna races through the foliage and the Grey Werewolf chases her getting closer and closer. 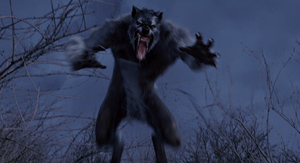 Anna runs out of the forest stopping at the edge of the cliff and sees the Wolf Man leaping out of the bushes and straight at her. 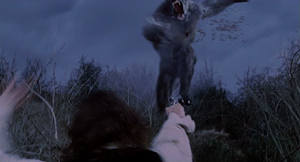 Velkan shoves Anna out of the way and fires his gun shooting the Wolf Man who howls in pain but manages to chomp into his shoulder and tackles Velkan off the cliff and into the river.