Monstrous Alien
Grid is a Xenomorph that appeared as the secondary antagonist of the 2004 film Alien vs. Predator. It, along with its siblings, is loyal to the Xenomorph Queen.

For a Xenomorph, Grid was cunning and is not simply following its instinct blindly unlike typical instinctive creatures or the rest of brethren except the Queen.

Grid first appeared in the film during the struggle between the Predators and humans in 2004, sneaking in and entered their fight. It joins the struggle by impaling Chopper and killed him with head-bite before he could kill Alexa Woods and toss his corpse aside. Notices that his first Xenomorph foe has showed up and murdered his brother, Celtic turned around, dropped his human opponent, and charged at Grid.

Grid jumps on him and they fight viciously to the death, where in this battle, the Alien discovered caustic properties in it's blood and used it to get the upper hand, something that it discovered when Celtic sliced the blade of his tail off where the process also rendered his wrist blades useless. After being battered several times, Grid drenched its opponent with its blood from its severed tail twice, which the second attempt was eventually hit Celtic's breast plates that forced him to removed it. Grid then tries to ambush Celtic when the latter was distracted, but his lightning reflexes allowed him to perform counterattack by firing constricting net on the Alien's body. Grid struggles to break free as Celtic approaches his seemingly helpless foe and the net tightens around it and resulting grid-like scars on its head and shoulder that gives the Xenomorph its namesake. However, Grid's acidic blood saved it as its blood burns away the net, allowed it to break free and pinned the Predator just as he brandishes his dagger and biting into his skull.

After Grid snatched Sebastian De Rosa to be impregnated with a Xenomorph embryo while the former tried to help Lex who dangled precariously from a broken bridge, it stalked Scar alongside its siblings just as Alexa surrendered Scar the stolen plasma caster. However, with one of its siblings failed to killed them both, Grid and its siblings go to attack them together, only to be barraged by Scar's plasma bolts. Grid was outraged upon watching its siblings unable to approached Scar, until the Queen called them for her aid. Thanks to the newfound knowledge of the corrosive properties of their blood, Grid had its siblings wound their Queen on her body parts that are bounded by shackles so her chain would by corroded by her blood, but forgot to do the same on the final chain on her hips which later serves as the cause of her later downfall.

Aware that Scar was dangerous as long as he still carry the plasma caster, Grid had one of its siblings to disarm the predator and killed him first. It and the rest of the Xenomorphs then surrounded both Alexa and Grid after both of them killed the said Xenomorph. Grid attacked, but Scar and Lex managed to slip away by activating an emergency winch that hauled them up through the access tunnel in the ice, leaving Grid behind. Grid then perished when Scar's Self-Destruct Device detonated, destroying the pyramid and many other Xenomorphs in the process except the Queen that later confront them on the surface.

The "Nethead" skin, based off of and often considered to be the same Alien as Grid.

Grid and its siblings surrounding Alexa and Scar. 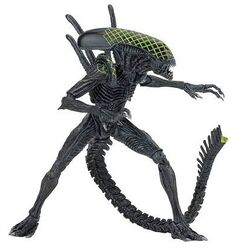 NECA figure of the Grid Xenomorph.