He then stalked Scar, who was going to take his weapon from Alexa Woods. Grid and his Xenomorph siblings were spotted by Scar, who started shooting at them. The Queen called for the Grid and the others, who came and freed her from the chains that bound her. He chased Alexa and Scar, but Scar blew up the pyramid they were in, killing Grid and his siblings, while Sar and Alexa got out. 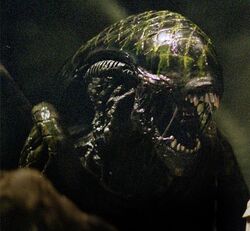 Retrieved from "https://villains.fandom.com/wiki/Grid?oldid=403715"
Community content is available under CC-BY-SA unless otherwise noted.