Depowering it's foes during battle.

Griever (in Japanese: グリーヴァ, Gurīva) is a mighty beast that is the most powerful of all the Guardian Forces (also called "GFs") and a character from Final Fantasy VIII. His name is also a term in the game. This legendary monster is actually the image of a lion's head crest that is commonly associated with a SeeD member and hero Squall Leonhart, who admires lions for their strength and bravery. The icon itself was soon brought to life as a Guardian Force created by the magic of the malicious Sorceress of the Future known as Ultimecia via Drawing the image from Squall's mental interpretation of the symbolic emblem.

Griever resembles a giant, anthropomorphic lion-like creature with a pair of wings, crimson blade-like protrusions on his arms and horns on his head. His skin is deep dark purple with crimson patterns. He has white hair or fur on his head (supposedly his mane) and parts of his body, and his wings are somewhat bat-like, yet have white feathers instead of leathery membrane.

Squall wears a chain necklace with a pendant of Griever above a cross reminiscent of the Cross of Saint James. The pendant emblem is also featured on Squall's gunblade case.

Squall also wears a ring featuring a profile of Griever's head along with one wing along its side. Rinoa Heartilly expresses interest in this ring later on in the game and eventually ends up possessing it where she wears it next to her own ring through a chain around her neck. Eventually Squall allows her to keep it.

The form of Griever is represented on a large scale on two of Squall's Gunblades; the Revolver and Lion Heart.

For the Revolver, an etching of Griever's profile is represented on either side of the blade. A keychain possessing a representation of Griever's bust, similar to the necklace, is attached to the gunblade's handle.

For the Lion Heart, the entire magazine assembly is designed into a stylistic representation of Griever with a large wing and lion head as well as two paws that follow the lines of the gun-section to the blade.

Griever is not only a symbol of the virtues Squall values, but is also his own interpretation of the ultimate Guardian Force. During the final battle, Ultimecia Draws Griever as a Guardian Force from Squall's mind, bringing Squall's perceptions of the being into existence to fight the "Legendary SeeDs", the heroic SeeDs members she perceives as a threat to her very survival and her tyrannical reign during their ultimate confrontation at the Ultimecia Castle.

In battle, Griever is capable of using the powerful Shockwave Pulsar as well as being able to Draw and attack with its claws. Griever possesses the ability to fully remove an entire stock of magic as well as simply dispelling a character, sending them careening into time.

After Griever has been defeated, Ultimecia junctions herself to Griever for the third stage of the final battle, creating a twisted hybrid form of Griever with Ultimecia's torso and arms on its chest and deformed limbs and wings resembling Ultimecia's own more closely.

This form of Griever can cast Holy and Dispel and possesses the ability to instantly kill Guardian Forces through GF Lethal Strike. Another special ability is to summon Helixes, which allows the hybrid to cast not only Ultima but, if there are two of them, the powerful Great Attractor.

In Dissidia Final Fantasy and Dissidia 012 Final Fantasy, Ultimecia's EX Mode is a variation of her hybrid form with Griever. Rather than Griever taking on some of Ultimecia's qualities, Ultimecia takes on some of Griever's qualities, including a lion-like face with a white mane, white feathered wings, and using Griever's claws as her arms while her own arms are crossed over her chest. Ultimecia's EX Burst in this form is a variation of Renzokuken called "Time Compression". The finishing blow of her EX burst is called Sorceress Heart, meant to be a parallel with Squall's Lion Heart.

In her 2 alternate outfits, Ultimecia continues to Junction Griever, the additions to her appearance taking on different color schemes to fit the outfit more. In her second alt only, Griever's wings are not added with the Junction as Ultimecia has no wings in her base form.

An alternate version of Squall's signature Griever pendant, previously only seen as a collectible sold by Square Enix, is worn by Squall in the game's ending.

Since Griever is Squall's icon crest animal, the non-specific appearance of it is directly related with the appearance of Squall in other games and media, like Kingdom Hearts, Dragon Quest, Final Fantasy, Itadaki Street Special, Dissidia Final Fantasy, and other related merchandise.

Squall Leonhart (also called himself "Leon") still wears his Griever pendant in the Kingdom Hearts series, and his gunblade has the Griever keychain attached to the hilt. Squall's jacket has two red wings on the back, meant to symbolize both Griever and Rinoa.

2 Keyblades in the Kingdom Hearts series, the Sleeping Lion and the Lionheart, are modeled after Squall's gunblade and are decorated with silver Griever accessories.

The Griever pendant also appears, wrapped in black flame, in the Kingdom Hearts manga (more precisely, the first volume on page 84) as a symbol on one of the opening chapter pages. The image perhaps symbolizes Squall's defeat and inability to overcome the Heartless on his own since their attack of his homeworld (the Radiant Garden).

The 2 battles with Griever in Final Fantasy VIII, each feature a unique battle track. The battle music used for Griever is titled "The Legendary Beast". During the battle with the fused form of Griever and Ultimecia, the music used is titled "Maybe I'm a Lion".

As Griever is in heavy association with Squall it should come as no surprise that it appears in most of the Final Fantasy VIII merchandise. Some of the most prominent articles in the collection are Squall's Griever necklace and ring, while other items, such as lighters, watches, and clothing, feature the Griever image. A figure of Griever, as well as one of Griever fused with Ultimecia, have also been released, as part of Final Fantasy Creatures Vol 1 and Vol 4, respectively.

As a special series of collectors' items, Square Enix began selling an alternate design of the Griever necklace, with a larger, more detailed cross with vines wrapping through it. This design would later appear as worn by Squall during the final FMV sequence in Dissidia Final Fantasy, albeit without the chain necklace.

A Final Fantasy VIII theme JVC minidisc player also exists, only acquired as a reward by entering a Coca-Cola prize draw in Japan. The minidisc player was limited to 5,000 pieces. The unit is manufactured by Victor Japan/JVC and has the Griever symbol embossed on the metallic plate on the front of the player, with the Final Fantasy logo in the corner, and the Coca-Cola logo on the back. The earphones have the Griever symbol on them as well.

A Griever-themed Final Fantasy VIII Zippo lighter has also been released, at the limited quantity of 1,000 pieces. Each lighter comes with a certificate of authenticity and they are serial-numbered. The lighter has the Griever emblem embossed on the lighter's surface, with the text "Sleeping Lion Heart". It comes with a solid steel stand with the Revolver and the text: "Final Fantasy VIII". 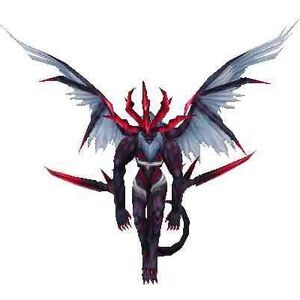 Griever, the mightiest and most powerful of all the Guardian Forces. 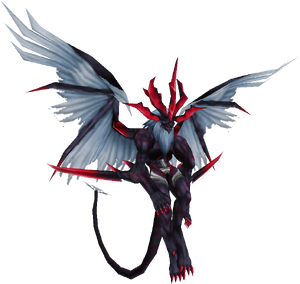 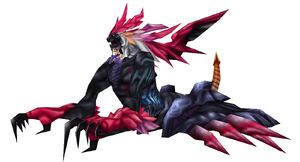 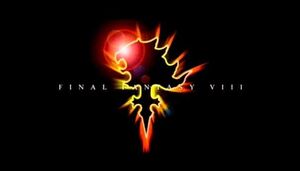 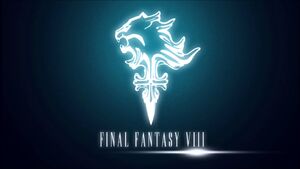 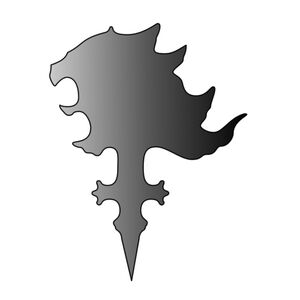 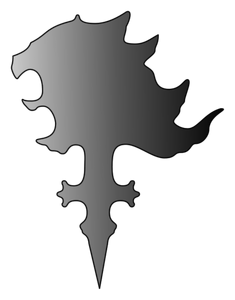