Pick flowers to poison the King.

To regain his dragon form (succeeded).

To rule the world and enslave the humanity (failed).

He was both voiced and portrayed by the British-American actor Harry Van Gorkum.

In his natural dragon form, Griffin is a large, fearsome male dragon who appears to be a mix of Western/Eastern dragons. He is smaller than Draco, but larger than Drake. His thick, glossy, scaly hide is blood-red, with a golden back, eyebrows and underbelly. He has sharp teeth, enormous wings and a long neck, as well as a long tail with four, razor-sharp grey spikes on it's club-like end. Griffin also has twin horns on his head, several grey spikes on his back, and huge grey feet with sharp claws.

As a human. Osric is a tall, lean, handsome and muscular man with fair skin and a dark brown beard, mustache and hair.

Griffin is an enigmatic dragon because not much is known about his past. When Bowen began his dragon-slaying, Griffin developed a strong hatred and a desire for revenge against mankind. However, he can be considered tragic because he would likely not turned evil if Bowen would not have slayed all dragons. Griffin is arrogant and somewhat nihilistic, as he regards the dragon pledge to serve mankind as nothing more than a "cruel joke", and believes the old code of chivalry is nothing more than a means to control and submit weak people.

When he was in his human form, Lord Osric of Crossley, Griffin was capable of false politeness and sophistication, as seen with Geoff, when he feigned noticing a lot of potential in him, by taking his defense against Roland, by training him in swordfight and complimenting him on his skills. He was also charismatic, been able to been elected as the advisor of the King. He was intolerant of failure, stabbing his loyal servant Stefan, despite the fact the latter served him many years and never failed him once.

Griffin presumably fled during Bowen's twelve years of dragon-slaying. He plotted a rebellion against mankind, and planned to rule the world. However, none of the other dragons agreed to follow him. After killing many humans, Griffin was captured by the dragon council, and as punishment for his crimes, his heart was removed and he was cursed to live as a man (the form he hates most). Griffin was then exiled and he took a new alias: Lord Oscric of Crossley. Rodrick persuaded the king to elect hih as his adviser and promises to guide the kingdom under the Old Code. Osric, pleasantly surprised to learn that a dragon still exists, offers to a young dragon Drake the opportunity to become the defender of the kingdom, while Geoff, being his inseparable friend, will have the opportunity to become a knight under the leadership of Osric, the two, enthusiastic, accept.

Osric begins to distrust Lian and Kwan, two Chinese travelers, and orders his men to bring them to him. Unfortunately, the men mistakes Mansel, the friend monk of Geoff, and arrests him instead. Osric, infuriated by the failure, kills his most trusted servant Stefan.

Osric finally succeeds to arrest Lian and Kwan, then convinces Geoff and Drake to fight alongside him against the enemies of the kingdom who have besieged a village, then the two fight alongside Osric, who is apparently mortally wounded to save Geoff. Osric asks for Drake to use his powers to save him, giving him half of his dragon heart, but Goeff notes that Osric is not really hurt, in fact it was a staging, then Drake and Geoff went flee and escape from Osric and his men. Osric is actually a evil man, even the king's mental instability was caused by him since he regularly made him take a substance that makes him deliring.

When, at the castle, Oscric recognizes a familiar box. Master Kwan, the elder Chinese, then recognizes Oscric's true identity and orders the amulet burned. Oscric recovers the box and discovers his lost heart. Out of revenge for his ancestor's slaying of the dragons, Oscric throws a knife at Lian, Master Kwan's companion and the princess of China disguised, but Kwan intervenes and dies.

After reclaiming his heart, Griffin resumed his dragon form in front of the King's entire court. He attempted to persuade Drake to join him in his quest to enslave mankind. Although the younger dragon was briefly tempted by the idea of working with a fellow dragon, he ultimately refused, remembering that earlier he was about to give his heart to a falsely wounded Osric and that such an act would have cost him his soul. Thus, Drake challenged Griffin. After a short, but fierce battle, Griffin gained the upper hand and pinned Drake to the ground. He nearly killed Drake, but Drake wounded him with the blades in the tip of his tail, and Drake's human friend Geoff threw a sword into Griffin's chest, causing Griffin to take flight. Enraged, Griffin prepared to attack again. However, Drake sent a blast of ice breath at the evil dragon, freezing him solid. The frozen Griffin fell to the ground and shattered into hundreds of pieces. Unfortunately, one of the ice shards hit Geoff in the heart and killed him, but Drake used his heart to revive his friend (which mirrored what Drake's father Draco did to save Einon).

Because of Griffin's crimes, his soul was very likely erased from existence, though it was not confirmed in the movie. 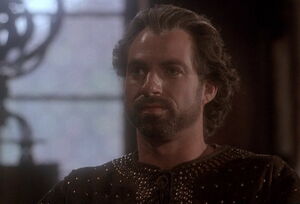 Griffin in his human form as Lord Oscric.
Community content is available under CC-BY-SA unless otherwise noted.
Advertisement