Villains Wiki
Register
Don't have an account?
Sign In
Advertisement
in: Doctors and Scientists, Tragic, Book Villains,
and 71 more
English

Find a cure for his invisibility.

Commit as much chaos as possible.

Griffin is the titular character and main antagonist in the 1897 novel The Invisible Man by the late English writer H.G. Wells and its following adaptations. He creates a potion that can make him invisible, though at the cost of losing his sanity.

Originating from one of the most iconic literary pieces of its time, the Invisible Man has become an icon of pop culture, and a legendary member among Universal's lineup of monsters, in near equal status with the likes of Dracula and Frankenstein's Monster.

In the 1933 film he was portrayed by the late Claude Rains, who also played Erique Claudin in 1943's The Phantom of the Opera.

The novel's Griffin is callous and cruel from the beginning and only pursues the experiment for wealth and his ego. The film portrays Griffin more sympathetically than the novel. It shows Griffin as an honourable man who is misguided. His insanity is purely a side-effect of the invisibility drug and his motivation for the experiment was a misguided desire to do good for science and mankind, born primarily out of his love for his fiancée.

Griffin is an albino who studies optical density. His discoveries were supposed to make him famous, and he wants all the credit to himself by quitting the university he's working and continuing his experiments in an apartment. In his studies, he eventually develops a potion that renders him invisible to the human eye.

During his invisible state, he tries desperately to find a cure. He steals money from people which magnetized him to the authorities. To hide when he takes residence at the Coach and Horses Inn in Ipling, Griffin steals a trenchcoat, dark goggles, bandages, and a fake nose to conceal his identity. However, he draws more attention when his experiments and billing to the local reverend arouse suspicion.

While escaping Ipling, Griffin forces a homeless man named Thomas Marvel to carry money for him. Marvel escapes the Invisible Man's clutches and runs off with Griffin's money. While in the town of Port Burdock, Griffin seeks help from a former acquaintance Dr. Arthur Kemp in aiding him in a reign of terror.

Refusing, Kemp summons the local authorities including Colonel Adye who is shot dead by Griffin. Enraged and determined to punish Kemp, Griffin follows Kemp back to Ipling. Ultimately, Griffin meets his end at the hands of the mob summoned by Kemp. In death, the invisibility effect wears off and he is visible again once more.

The Universal incarnation, given the first name Jack, and unlike the novel version, Jack Griffin had a more sympathetic background. He was a researcher working in food preservation and fell in love with his employer's daughter Flora. Determined to prove himself both a successful researcher and good husband material for Flora, Griffin tests with a dangerous chemical called monocane, eventually discovering the formula for making living beings invisible. However, his applications of the formula to himself drive him to insanity.

Like in the novel, Griffin seeks aid for a megalomaniacal plot to create invisible armies from Kemp who refuses. Unlike in the novel, Griffin succeeds in killing Kemp by forcing his car to crash down a hill. He is pursued and fatally shot while trying to escape. He later dies in the hospital, apologizing for his actions and noting "I meddled in things man must leave alone." With his final breath, his body becomes once again visible. 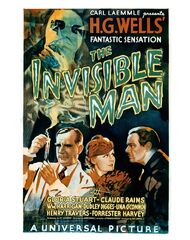 The poster for the 1933 movie version of The Invisible Man. 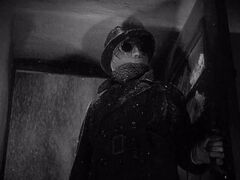 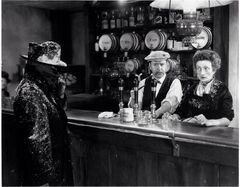 Griffin and the Innkeepers. 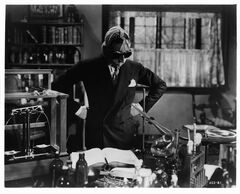 Griffin's lab at the Inn. 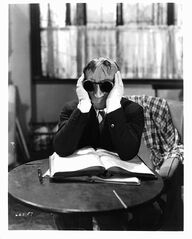 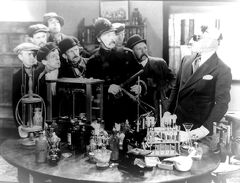 The authorities arrive to arrest Griffin.

Griffin reveals himself to the authorities. 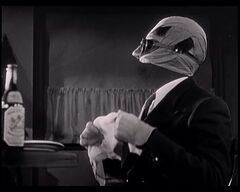 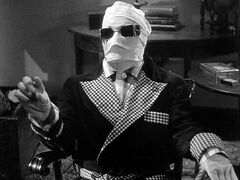 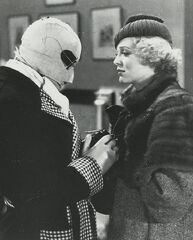 Griffin and his beloved. 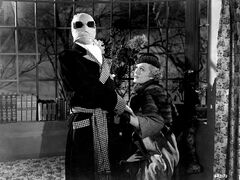 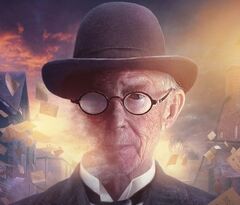 Griffin as voiced by the late John Hurt in Big Finish Productions.