Griffons are a large, dark, griffin-like creature of Grimm from the American animated webseries RWBY.

Griffons have the head, wings and talons of a predatory bird and the legs, tail and body of a lion. On their heads, they possess an external skull with a bone-white beak and four red eyes. They are covered in black feathers.

Griffons were among the Grimm invasion of Vale during the Battle of Beacon. Several attacked students in the Amity Colosseum, but were fought back by Professor Peter Port and Doctor Bartholomew Oobleck, who kept them at bay as the students escaped.

More Griffons swarmed in Beacon's courtyard, forcing the fleeing students to fight back. As Ruby Rose fought Roman Torchwick and Neopolitan on top of an airship, Griffons swarmed in packs to the city, with one landing on the ship and devouring Torchwick whole. It then attempted to kill Ruby, but it was kicked away and left on the crashing airship.

Griffons appear as units in RWBY: Amity Arena, serving as strong, durable airborne units that attack with their wings and talons and do good damage to ground and air forces.

Griffons posses great durability and are able to tank heavy fire and melee attacks with relative ease. Using their strong wings, they are capable of sustained flight for indeterminate amounts of time. Offensively, Griffons posses sharp talons they can use to claw at enemies, as well as a pointed, avian beak that can be used to attack at close range. 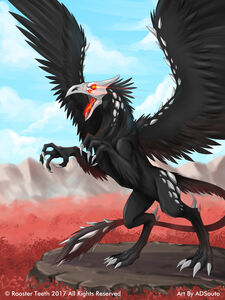 A Griffon Grimm card for the board game RWBY: Combat Ready. 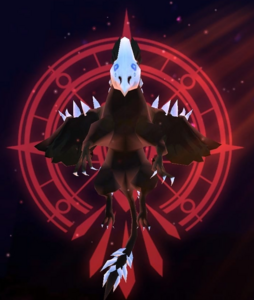 A Griffon unit as it appears in RWBY: Amity Arena.

Griffon card in RWBY: Amity Arena.
Add a photo to this gallery
Retrieved from "https://villains.fandom.com/wiki/Griffons?oldid=3893019"
Community content is available under CC-BY-SA unless otherwise noted.