Spending time with his wife Lamie.

Defeat the Zyuranger alongside Lamie.

Usually a very serious and stern warrior, he gets comically smitten at the presence of Lamie. Also in spite of doing very well fighting together with Lamie, He is reluctant to let Lamie fight against Zyurangers.

Grifforzer is considered to be the strongest swordsman who swears loyalty to Bandora who carries out her will without question. From Bandora's perspective Grifforzer is a competent and reliable lieutenant and she couldn't have asked for better right-hand. His combat prowess is superb (there are depictions that Grifforzer had been pushed back temporarily from time to time but never mentioned Grifforzer being outright defeated) as he is capable of fighting 4 regular Zyuranger members alone and can match with Burai or Geki on even terms. When he is enlarged he can take on Daizyujin without giving in too much. He is a brilliant tactician with amazing strength as well, which he is a dangerous opponent nonetheless, being able to outlast and defeat Daizyujin even alone.

Unlike most sentai field commanders that died at the hands of the RedRangers, he was also simply sealed off. While inside of the urn, Lamie gives birth to a son which Bandora adores. Considering most right-hand villains in sentai series ends up dying, Grifforzer's imprisoned ending is an unusual case.

Grifforzer is an lion-faced warrior and dons golden armor and armed with sword ladened with golden hilt. He has large wings that enable him to fly and like Lamie, he possesses a tail resembling scorpion sting which is capable of injecting venom.

Being a man of few words, he only speaks when necessary. Grifforzer was mute until Lamie came along, as he claims that he was saving his voice for her - but apparently he forgot to speak after "saving" his voice far too long, so Bandora restores his ability to speak and Grifforzer renews his pledge of loyalty to Bandora. Despite initially being mute (albeit able to grunt), he is still capable of driving command to his soldiers with his vicious personality.

In spite of stern lone warrior he is capable of sociability: Grifforzer is seen interacting Dottopotto and Bookbok, singling along with Bandora Gang etc.

If he withdraws from battlefield it was mostly because either his other objectives were more important, or his opponents were incapable of fighting him earnestly, indicating that he shows a sense of honor.

Unlike the others, he is much less of a comedy relief like Pleprechuan and he is far more vicious than the others; unless he is around Lamie. 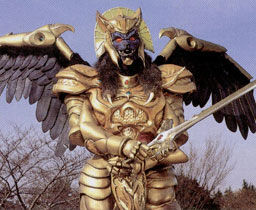 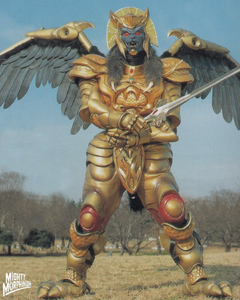 Retrieved from "https://villains.fandom.com/wiki/Grifforzer?oldid=4341058"
Community content is available under CC-BY-SA unless otherwise noted.