Loyally working for the Soviet Union.

Kill Alexei for his betrayal (succeeded).
Help his government operate the Key in Hawkins (failed).

Grigori is a major antagonist in the Netflix sci-fi horror series Stranger Things.

A devoted Russian hitman aligned with the USSR, Grigori and his government were aligned with the corrupt mayor of Hawkins, Indiana, Larry Kline to create a machine that would open a portal to the Upside Down, underneath Starcourt Mall. When police Chief Jim Hopper and Joyce Byers discovered there were Russians in Hawkins, Grigori was assigned to hunt down and kill them.

He was portrayed by Andrey Ivchenko, who also played Perseus in Call of Duty: Black Ops Cold War via motion capture.

Grigori was present at the failed test of a Key machine that was designed by a group of Russian scientists, including Dr. Alexei. When the machine failed and killed several Russian personnel in HAZMAT suits, Grigori was ordered by his superior, General Stepanov, to punish the scientist for his failure. Thus, Grigori strangled the unnamed scientist to death. The Soviet General then departed, and gave the newly-promoted Alexei and his team a year to perfect the “Key” by any means necessary as Grigori observed his superior’s departure, dropping the deceased scientist's corpse to the floor.

A year later, in the summer of 1985, Grigori was stationed at the secret undercover Red Army installation in the town of Hawkins, Indiana, where a natural Gate had just been closed the year prior, as an officer. Still serving alongside Alexei and under Comrade-General Stepanov, Grigori had shifted from “enforcer” to outright hitman, and was also undercover on the surface, posing as an employee, likely a corporate “fixer”, of the Starcourt company. Grigori acted as a liaison between the Russians and Larry Kline, the corrupt then-Mayor of Hawkins, and made unfair land grant purchases from the Mayor’s Office in the name of the Starcourt Mall, itself secretly a front business for the Russian operation, in order to acquire shell locations for generators to power the “Key” by allowing Starcourt Industries to agressively expand into East Hawkins.

He was later seen in the process of exiting such a shady dealing when Chief Jim Hopper of the Hawkins Police Department went to meet with Mayor Kline regarding a protest against Kline’s corruption, the Mall, and its negative effects on the businesses of Downtown Hawkins, being seen by Hopper exiting Kline’s office as Hopper entered. Later, Grigori again crossed paths with, and assaulted, the Hawkins Chief when him and Joyce Byers were investigating the condemned site of Hawkins National Laboratory, knocking Hopper unconscious and escaping on a moped. Hopper was later unable to recall facial details of Grigori to Joyce, only referring to him as a “Thug”, until the detail of the moped reminded him of the man in Kline’s office. When Kline attempted to respond evasively and claim Grigori was a plumber who he did not know the name of, Hopper threatened the Mayor with blackmail and then assaulted him, learning that Grigori was both an employee of Starcourt and was dangerous, with Kline keeping the records of Starcourt‘s land deeds on file as “protection” from him and his employers at Starcourt, much to Hopper and Joyce’s confusion.

After being contacted by Kline, who had been handcuffed to his bed by Hopper, that Joyce and Hopper were looking into the properties owned by the Russians, Grigori tracked them down to one of the properties where Alexei and another worker were in. As Grigori was investigating, Hopper sneaked up on him with his pistol, threatening him to surrender. Grigori, however, called his bluff and attacked Hopper, the two having a short fight before Joyce accidentally throws Hopper's pistol to Grigori during the fight and Grigori opened fire at them. Hopper and Joyce flee the scene with Alexei. Grigori tries shooting them down as they drive away but runs out of ammo.

Grigori starts following their tracks, eventually finding the abandoned car used by Joyce and Hopper, leading him to a nearby 7/11, where he learns from an employee that Hopper stole a patron's car with Alexei.

Impatient, Grigori confronted Kline in the upcoming Fourth of July celebration. Though Kline assured Grigori that the authorities were looking for Hopper, Joyce and Alexei, Grigori threatened Kline to find them, giving him only one day to do so.

In the Fourth of July celebration, Kline spotted Hopper and Joyce during the festivities and called up the Russians, who dispatch Grigori. As Grigori made his way into the festival, Grigori killed Alexei before pursuing Hopper. In a Mirror House, Grigori is ambushed by Hopper, who shoots him in his Kevlar vest several times before making his escape from the pursuing Russian assassins.

Later, Grigori found Joyce and Hopper in the underground base, the two attempting to shut down the gate. Grigori knocks out Joyce and begins fighting Hopper. The two men fight near the device for the gate, with Grigori almost killing Hopper in the process. However, Hopper gains the upper hand, stabbing Grigori's wound with his thumb. Before Grigori can retaliate, Hopper tells him, "I'll see you in Hell", before throwing him into the device, ripping Grigori to shreds.

Little is known about Grigori's personality, as he preformed his tasks with almost machine-like focus and seemed extremely no-nonsense, being somewhat disrespectful even to his fellow Soviet Comrades, aside from his employer, Comrade-General Stepanov, who he seemed to respect and obey. He also had disdain for Americans, the primary geopolitical rivals of the USSR. He is very aggressive even outside of combat, as evidenced by his interactions with a gas clerk attendant and mayor Kline, as during both conversations Grigori lost his temper and physically threatened them. He also was deeply loyal to his country, as he coldly executed Alexei using a silenced weapon without warning, did so without remorse due to the possibility of confessions being made by him to either Hopper or Murray Bauman, and called him a traitor in Russian as he did so. 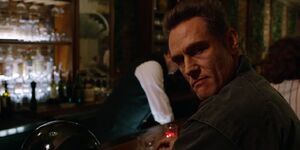 Grigori hunting for Hopper in the Hall of Mirrors. 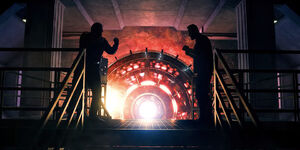 Grigori about to fight Hopper next to the Starcourt Key. 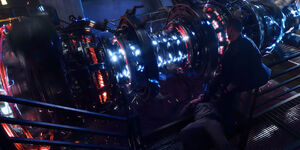 Grigori attempts to kill Hopper with the machine.