Mystic and self-proclaimed holy prophet of the Ogdru Jahad

Conspiracy to cause the Ragnarök

Grigori Rasputin (full name: Grigori Yefimovich Rasputin) is a fictional antagonist in the comic book series Hellboy. The character was created by Mike Mignola and John Byrne, based on the real life Russian mystic of the same name. He is one of the two archenimes of Hellboy alongside the Ogdru Jahad.

Grigori Rasputin was born a peasant in Siberia. As a boy he became aware of power in him, had visions of Baba Yaga, and became convinced he had a great destiny ahead of him. He became famous as a faith-healer, using his powers to cure the sick. When Tsar Nicholas II invited him to cure his son Alexei's hemophilia, Rasputin was given a place in the Russian court. However, his reputation as a heavy drinker and womanizer made him an embarrassment. Eventually, a small group of royals, led by Prince Felix Yusopov, lured him to a house on December 16, 1916 where he was poisoned, shot, and thrown into an icy river.

After being assassinated, Rasputin was revived and contacted by the Ogdru Jahad. They enlisted him as their mortal agent in the world. Soon after, Rasputin was contacted by the Nazis to begin development on an occult method for ending the war. From this, Project Ragna Rok was born. The Nazis sought to use Rasputin to defeat the Allies, but Rasputin knew this would never happen. He merely intended to use the Nazi’s resources as long as he could to achieve his own goals: to trigger the apocalypse which would jumpstart a new Eden. Rasputin first appeared summoning The Beast of the Apocalypse for the Nazis during World War II. When the summoning accidentally placed the creature (Hellboy) in the hands of the Allies, Rasputin retreated to the Arctic Circle.

He returned in 1994 with Sadu-Hem, a monstrous spawn of the Ogdru Jahad, in tow. Rasputin's goal was to use Hellboy's stone right hand to free the Ogdru Jahad from their crystal prisons and permit them to raze the earth. However, Rasputin's plans were foiled by the timely intervention of Hellboy's associates from the Bureau for Paranormal Research and Defense, Liz Sherman and Abe Sapien. Rasputin was killed and Sadu-Hem was burned to death.

Rasputin re-appeared as a ghost while his pawns attempted to restore the vampire Vladimir Giurescu to life. Rasputin directed Ilsa Haupstein, a loyal member of Project Ragna Rok and his faithful "Mary Magdalene", to abandon her efforts to revive Giurescu and instead place herself within an enchanted iron maiden presented by Koku. Haupstein did so, dying in the process, but her blood allowed the goddess Hecate to use the iron maiden as a permanent and semi-indestructible body. Hecate's mortal form, like that of Rasputin himself, had been destroyed.

Rasputin appeared lastly in his ghostly form as a counsel to Inger von Klempt. He persuaded her that she was to be the first of a final race of men, but she was executed by Lobster Johnson and the end of the world was averted with the destruction of the Conqueror Worm. Rasputin retreated to the roots of the Yggdrasil, where the Baba Yaga took what was left of his soul and placed it in an acorn.

Later, when Baba Yaga pours all of her power into her fight against Hellboy, she tries to use Rasputin's soul as her last gasp of power. However her servant Koku, seeing him as too dangerous to use, grabbed the acorn and threw it down among the roots of Yggdrasil into the fires of Hell, where presumably his threat is ended forever. Later in the BPRD: The Devil You Know Rasputin returns with the help from Varvara his illegitimate daughter and possessed by the Ogdru-Jahad to bring the end of the world until being defeated again by Hellboy.

Grigori Yefimovich Rasputin is the main antagonist in the 2004 film Hellboy and was portrayed by Karel Roden.

Rasputin was seen working with the Nazis in the film and demonstrated great occult abilities linked with the underworld. Rasputin was depicted as being nearly immortal; every time he died, he was resurrected with a part of his god within his body. This ability was likely inspired by rumors of the real-life Rasputin being difficult to kill. During the climax of the film, Rasputin nearly succeeded in freeing the Ogdru Jahad, but Hellboy rejected him and stabbed Rasputin with one of his own severed horns. Rasputin's 'god', a giant tentacled monster called the Behemoth, burst from his body and grew to gigantic size. Dying and outliving his usefulness, Rasputin alongside with his love Ilsa von Haupstein were crushed to death by the Behemoth.

Rasputin also has a cameo in the animated film tie-in to Hellboy II: The Golden Army.

Rasputin also makes an appearance in the 2019 film. 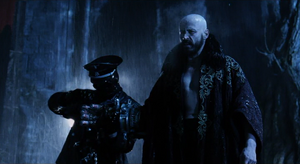 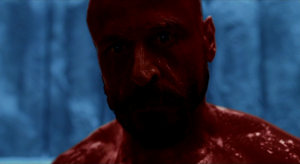 Rasputin being reborn from a pool of blood. 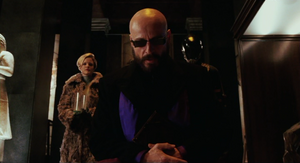 Rasputin in a flashback. 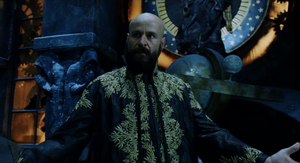 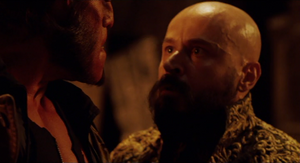 Rasputin being stabbed with one of Hellboy's broken horns.
Add a photo to this gallery

Retrieved from "https://villains.fandom.com/wiki/Grigori_Rasputin_(Hellboy)?oldid=3703402"
Community content is available under CC-BY-SA unless otherwise noted.