Having sex with his underlings.

Rasputin was a Siberian monk that traveled to Turkey in search of spiritual training from the priest known as Jovis Abraham. He presented himself as a humble pilgrim looking to join Father Jovis' order known as Sapientes Gladio and was accepted. He was trained by Father Jovis and his friend Cardinal Albert Simon; under their tutelage Rasputin gained much mystical knowledge and will-power. Once Rasputin had the training he needed he used it to make a contract with the demon, Asmodeus. He formed a soul-pact with the demon king which granted him great powers at the risk of becoming possessed by Asmodeus eventually if he ever gave into his darker nature completely; a gamble Asmodeus was certainly willing to take on Rasputin. With his new powers secured Rasputin showed his true nature to his former teachers. Jovis and Albert fought to defeat Rasputin but were overwhelmed by his demonic powers. Upon defeating Jovis and Albert, Rasputin took-over as the new leader of Sapientes Gladio and converted the once peaceful philosophical sect into a terrorist group dedicated to their master's ambitions to taking over the world.

Rasputin used his powers to gain favor with Tsar Nicholas II by treating his son Alexei's hemophilia. Curing Prince Alexei gained him the gratitude and trust of Tsarina Alexandra especially and Rasputin was entrusted with political powers while the Tsar was touring the front, although unlike the rest of her family, princess Anastasia never did trust him. With the manpower of Sapientes Gladio and the prestige of the Russian throne Rasputin began work to take over Europe by simultaneously accelerating World War I and encouraging the aristocrats to loss empathy with the people thus planting the seeds of rebellion. Playing political games and withholding information about potential enemies and the plights of allies from the royal family, Rasputin was able to keep the Tzar too busy dealing with the War to run the country himself. Rasputin's plan was make the other nations and Russia's own people so fed-up with the Romanovs that he could insert himself onto the throne as guardian of an illegitimate son of Nicholas, his second in command, Nicolai Conrad. During the events of Shadow Hearts, Rasputin would have been assembling his plans and establishing his influences.

However Albert Simon had made a deal with a demon god of his own, a rival of Asmodeus named Amon. Rasputin and Asmodeus feared Amon's interference so Rasputin began to look into acquiring a powerful item to destroy Albert Simon: The item in question was known as the Holy Mistletoe. The Mistletoe would sever the power of Amon and slowly destroy Simon's soul in the process. He sent Nicolai to retrieve the Mistletoe but by the time Nicolai discovered it's location in the Vatican and gained the right to enter; Amon had already been passed on from Albert Simon to the harmonixer Yuri Hyuga. Rasputin instead had the Mistletoe used on Yuri effectively neutralizing his powers for a time. But Albert would lend Yuri the power he needed to overcome the curse partially by reawakening Amon's power, if not stopping the future decay of Yuri's soul.

With Yuri's connection to Amon reawakened Rasputin's leverage over Yuri quickly faded. Yuri fused with Amon and fought Rasputin in the skies above Petrograd demonstrating the demon god's power. At-last forced to the limits of what he could accomplish as a mere human, Rasputin decided to fully invoke Asmodeus, becoming massively more powerful but also possessed in the process. After becoming possessed by Asmodeus, Rasputin's ambitions went from global conquest to watching mankind suffer and die from generations of war and demonic hoards.

Without Asmodeus's full power Rasputin has displayed the power to place others in a hypnotic trance as well as full out dominate them. He is also guarded by a nigh invulnerable demonic shield resulting from Asmodeus's presence around him. He can also summon and control various hoards of demons and has shown the ability to levitate. With Asmodeus's full powers Rasputin has been shown to be able to summon a demonic living fortress, fly, use powerful dark and holy magics, teleport and transform into Asmodeus's native demonic form. 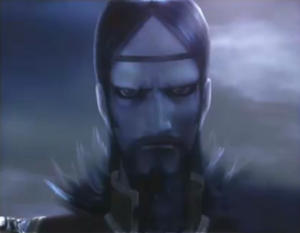 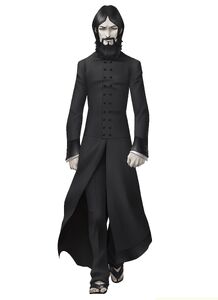 Grigori Efimovich Rasputin
Add a photo to this gallery

Retrieved from "https://villains.fandom.com/wiki/Grigori_Rasputin_(Shadow_Hearts)?oldid=3596183"
Community content is available under CC-BY-SA unless otherwise noted.