Kill Sora, Donald, and Goofy and take their hearts (failed)

The Grim Guardianess is an Emblem Heartless that appears in Kingdom Hearts III. It is the boss of the world Kingdom of Corona, and Mother Gothel's Heartless.

The Grim Guardianess is an Emblem Heartless that resembles a giant tree. Its face is light brown and made out of wood, and like most Heartless, it has solid yellow eyes and a jagged mouth. It has four dark green arms and purple hands with black fingers with purple fingertips that extend out of its "mane", which is made out of green leaves. Its bottom resembles a tree stump and has green markings at the tip, and its Heartless emblem is located on its forehead.

When Mother Gothel dies after having stabbed Flynn Rider like she does in Tangled, Marluxia appears outside the tower and says that Mother Gothel can no longer be allowed to be around Rapunzel, as she has fallen to darkness and is thus a danger to the Princess of Heart. He proceeds to turn Mother Gothel's lingering darkness into the Grim Guardianess, which immediately attacks Sora, Donald, and Goofy, but they manage to defeat it. 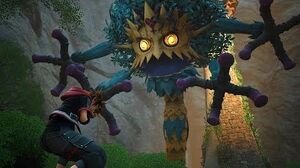