The Grim Reaper is a minor villain in the video game Kingdom Hearts II. It is an Emblem Heartless that resides in Port Royal.

Arrival of the Grim Reaper

When Sora and his friends return to Port Royal to search for any members of Organization XIII, they discover that the Aztec treasure has once again been stolen and that Captain Jack Sparrow has been cursed to be an undead skeleton. The group head towards Isla de Muerta to investigate, but they are confronted by the 10th ranked member of Organization XIII; Luxord. Shortly after that, Luxord summons the Grim Reaper to attack them. Though they throw it off the Black Pearl and into the sea, Luxord has his Gambler Nobodies steal some of the medallions. This activates the curse on the Grim Reaper and allows it to revive itself and knock the heroes onto the Interceptor, which Luxord then sinks with cannon-fire.

Once Sora and his friends get to land and recover the medallions, they come to the decision that Luxord must have taken the chest of medallions back to town. They follow him there, where they find the chest and an undead Grim Reaper. After a long and grueling battle, Sora and his friend managed to defeat the Grim Reaper, removing the curse on Jack, but Luxord takes the monster's heart and escapes through a Corridor of Darkness. 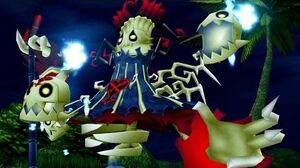