Homicidal Robot
Grimm Foxy, also known as Jack-O-Foxy, is the secondary antagonist of the Curse of Dreadbear DLC to Five Nights at Freddy's VR: Help Wanted. He is a Halloween-themed version of Foxy the Pirate.

Grimm Foxy was created by Fazbear Entertainment as part of their Halloween update for the "Freddy Fazbear Virtual Experience", alongside Dreadbear.

Grimm Foxy replaces the regular Foxy in the Danger! Keep Out! mode of the Curse of Dreadbear DLC, behaving exactly his original counterpart. When he attacks, he will first peek out of the curtains, then he will come out further and get ready to charge. In order to prevent his charge, the player must use the Light button on the camera when he is fully visible.

He also appears in the Corn Maze minigame in the Afraid of the Dark mode. There, he wanders around the maze, occasionally scraping his sickle on objects and singing to himself, chasing after the player if he notices them. As more keys are collected, Grimm Foxy begins to become faster and more aggressive. The only way to hide from him is to use the numerous character sets scattered around the maze, which, if performed successfully, will cause Grimm Foxy to run past his hiding spot and disappear. He can also be seen in the Game Over screen, where he is found standing behind the closed gates, scratching the brick-structured column.

Grimm Foxy is similar to Jack-O-Bonnie and Jack-O-Chica, in that he’s a jack-o-lantern-themed version of his original counterpart, with various parts of his body glowing brightly and possessing orange fur and his hook has been replaced with a sickle.

Grimm Foxy found behind the gates. 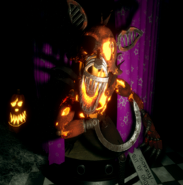 Grimm Foxy emerging from the curtain. 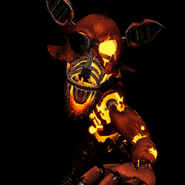