Prolong the life of the Nightmare's Heart.

The Grimm Troupe are a supporting antagonistic faction in Hollow Knight, introduced in the second content pack of the same name. The cult is led by the mysterious Grimm. Their objective is to seek out the flames of Hallownest and other fallen kingdoms, so they can complete the Ritual and prolong the life of the Nightmare's Heart.

Little is known about the origins of the Grimm Troupe, although the clan members and the White Lady mention how they have existed for a long time feasting off dying kingdoms of the world. The Troupe is connected to the Nightmare Lantern, which is the anchor that allows them to manifest in the real world.

The Knight encounters the Troupe after lighting the Nightmare Lantern in the Howling Cliffs, granting them access to Hallownest. Setting their base in Dirtmouth, venturing inside the main tent introduces the player to Grimm, who gives the Knight the Grimmchild Charm and orders them to seek the flames of Hallownest gathered by the Grimmkin. After the Knight defeats a wave of three Grimmkin Novices, Grimm will upgrade the Grimmchild's capabilities. After a second wave, this time of Grimmkin Masters, Grimm absorbs the Grimmchild within his cloak and challenges the Knight in combat, but loses. He then gives the Grimmchild back, more mature than before, and tells the Knight to seek out the last remaining flames before they could start the Ritual.

Afterwards, the Knight is given two options to complete Grimm's quest; to finish the Ritual by gathering the last three flames collected by Grimmkin Nightmares and then Dream Nail Grimm to face and defeat Nightmare King Grimm, or they can return to the Nightmare Lantern and destroy it, banishing the Troupe back to the Nightmare Realm.

Completing the Ritual and defeating Nightmare King Grimm transfers the Nightmare's Heart from Grimm to the Grimmchild, growing it to its fourth and final stage, where it now contains a living, scarlet flame. Destroying Grimm sends away his Troupe and tent, although Divine will stay behind and upgrade the Knight's Fragile Charms.

If the Knight encounters Brumm in the Deepnest before collecting all three remaining flames, he explains that the Troupe may be enslaved to the Ritual itself and seeks to end it in order to undo the effects that the Troupe committed on all of the kingdoms they have laid waste upon. He guides the Knight to the Nightmare Lantern, and should its flame be extinguished, the Troupe is banished back to the Nightmare Realm, reverting all traces of their existence in the physical world.

Grimm's second in command, Brumm serves as the entertainer of the group, wooing the crowds with his accordion solos. However, despite his loyalty to Grimm, he is against the ideals of the Troupe and Grimm, finding himself a slave to the Ritual and warns the Knight not to proceed if they too want to become a slave to the Ritual. He assists the Knight if they attempt to banish the Troupe.

After the Troupe is banished, a bug similar to Brumm appears in Dirtmouth named Nymm. He has no memory of anything prior to arriving at Dirtmouth, but offers the Knight the Carefree Melody Charm. It is possible that Nymm is Brumm after being freed from the ritual, losing his memory in the process.

Divine is the shopkeeper of the Troupe. She is located in the tent next to Grimm's, demanding something good to eat. When the Knight wears one of Leg Eater's Fragile Charm, Divine takes interest in its smell and swallows it, refusing to spit it out unless the Knight pays her a large amount of Geo. Doing this will make her excrete the Unbreakable counterpart of the Charm.

She is the only member of the Troupe to stay behind after Nightmare King Grimm's defeat, and will remain until all three Fragile Charms are upgraded. Otherwise, if the Troupe is banished, all Fragile Charms she ate that were not upgraded will be placed where her tent was. If Leg Eater discovers that the Knight upgraded at least one of his Charms, he will seek out Divine, only for his dismembered limbs to be found in her tent, implying she ate him as he carried the Fragile Charms' scent.

The Grimmkin are the minions of the Troupe. These mischievous spirits come in three sizes: Grimmkin Novice, Grimmkin Master, and Grimmkin Nightmare. They collect scarlet flames within their torches, and must be defeated in order to relinquish their flame to continue the Ritual. Only three of each type must be defeated to progress the sidequest. Grimmkin abilities are to shoot out a barrage of flames from their torches and by diving at the Knight. As more Grimmkin are defeated, they gain more spells and health. Grimmkin Nightmares also deal two masks of damage whereas the other two deal only one. All three Grimmkin types appear in the audience during the battle against Grimm, but only Grimmkin Nightmares make up the audience of the Nightmare Realm during the Nightmare King Grimm battle.

Grimmchilds resemble Grimm's miniature form. They are the recipients for the flames of Hallownest; when they absorb three flames, they increase in size and become more powerful. A single Grimmchild is handed to the Knight by Grimm in the form of a Charm to serve as their familiar in Grimm's plans for completing the Ritual. When the Ritual is complete, the Nightmare's Heart transfers from Grimm to the Grimmchild.

Grimmsteeds are the haulers of the materials of the Troupe. They resemble Willoh from the Queen's Station of Fungal Wastes. Two can be found outside of the main tent. They cannot talk, but their thoughts can be read through the Dream Nail. The one to the left of the tent comments how Hallownest differs in comparison to the other fallen kingdoms they visited, and questions how many more they will visit. The other to the right comments that Grimm's light will guide them through the dark and long roads. 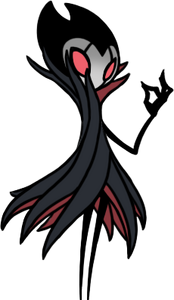 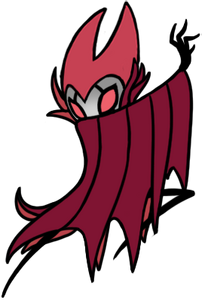 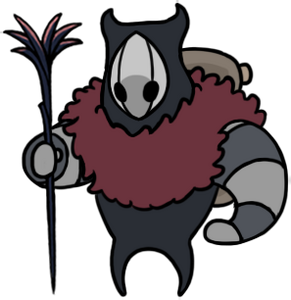 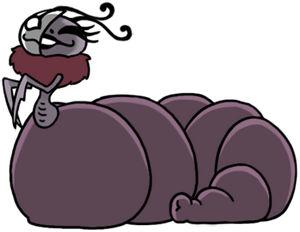 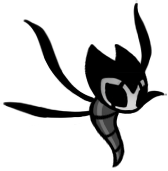 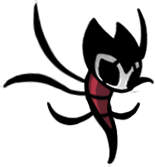 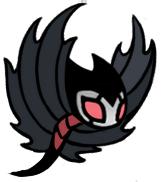 Grimmchild with the Nightmare Heart. 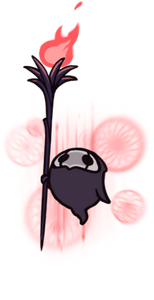 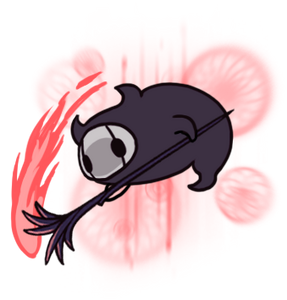 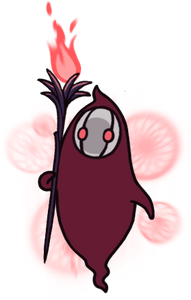 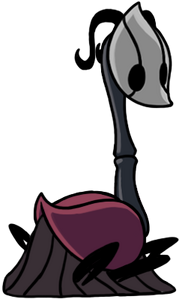 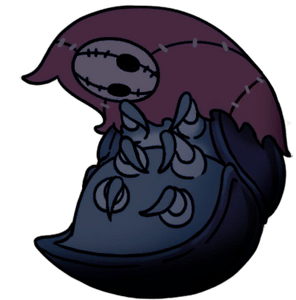 The corpse of an unknown large bug that ignites the Nightmare Lantern when Dream Nailed.
Add a photo to this gallery 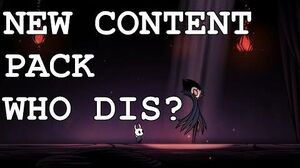 Retrieved from "https://villains.fandom.com/wiki/Grimm_Troupe?oldid=3999986"
Community content is available under CC-BY-SA unless otherwise noted.