Supreme Rulers of the Grineer

The Grineer Queens, also referred to as the Twin Queens, are two of the main antagonists of the MMO third person shooter Warframe.

They are the supreme rulers of the Grineer Empire and former Orokin nobles who survived the end of the Old War, thanks to the Grineer slaves starting to worship them and uniting under their rule.

All Grineer are genetically coded to be completely loyal to them and them alone. Those that are not are labelled as defective traitors, hunted down and executed. Following the death of the Elder Queen in the War Within, the Worm Queen is the sole ruler of the empire.

The Elder Queen is voiced by Tricia Brioux and the Worm Queen by Jex Black.

While the Queens may have been born as identical twins, they have since shed their original bodies and transferred themselves into bodies made by their Grineer servants, each having a unique appearance. Both have had several mechanical implants, typical for the Grineer, and their bodies below their waist are slug or snake-like.

The Elder Queen has a predominantly red and black color scheme and more regal-looking clothing than her sister. She has a mechanical right hand with which she holds the Kuva Scepter and also wears a pointed tall hat that gives the impression of a hood.

The Worm Queen meanwhile has a white and grey color scheme and significantly more augmented than her sister. Both of her arms and eyes are mechanical and her noseless face resembles a Grineer mask.

The Queens are both as cruel and arrogant as expected of tyrannical dictators, especially former Orokin. Their will is enforced with swift brutality and genocide appears to barely be a second thought for them, given how many colonies and civilians have been lost to their rule.

Among themselves they may have shared a loving bond in the past, but the Elder Queen has since taken a more abusive stance towards her sister, calling her "worm" and shushing her when she speaks out of line. That doesn't mean she doesn't care about her sister though, as when the Worm Queen expresses worry that the new fully-awakened Tenno are going to come for them, the Elder Queen is quick to comfort her and ease her doubts.

The Worm Queen meanwhile is a lot more psychotic than her composed sister. When Teshin asks her what they are going to do with the Tenno's body, she exitedly tells him that they were going to eat them despite this going completely against her sister's plan, which shows that she has eaten people before. When the Tenno breaks free of the Elder's trap and does arrive in person, the Worm Queen abandons her sister and rushes to safety. After her sister's death, she doesn't express any sadness over it and barely even acknowledges it.

The Tale of Two Sisters

The Queens' origin is told by a poem found by collecting small Orokin statues called Kurias that are scattered throughout the game.

They were born as the identical twins to an important Orokin nobleman during the Old War, which drew the ire from the elders that had gathered to celebrate their birth. The Orokin were disgusted by their identical looks as it was considered a trait of the ugly Grineer slaves and demanded them to be killed immediately, but their father was influential enough to protect them. While they may have survived being born, they were still shunned and rejected, which only strengthened their bond to each other. When the Old War ended and the Orokin Empire started to fall apart after the Slaughter at Terminus, the Grineer slaves took the opportunity to rebel and break free of their oppression.

With the Orokin's Dax soldiers gone and their father presumably dead, the Queens were forced to fight for their lives as everyone who remained turned against each other. The clones were inspired their strength and related to how similar they were to each other, and hoped that if the Twins could forge such strength, perhaps they could too. One by one the Grineer started to bow to them, but not as they had to the Orokin. These two deserved being worshipped. Once unified under their rule, the Grineer ravaged the Orokin colonies to gain territory, quickly becoming a new dominant power in the Origin System.

With the Elder Queen's clone body becoming weaker and weaker by the day and Sentient Hunhow's failed plan to kill the seemingly immortal Tenno having resulted in their full awakening, the time had come for the Grineer Queens to finally reveal themselves after centuries of remaining in utmost secrecy.

With her Kuva Scepter in hand, the Elder Queen commands Tenno ally Teshin to bring a Tenno to her. As a former Dax soldier from the fallen Orokin Empire, Teshin is still bound to the will of whomever holds a Kuva Scepter. He has no choice but to obey, but warns the Tenno not to follow him. 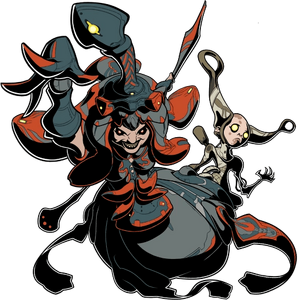 A Glyph depicting cartoonish versions of both Queens. 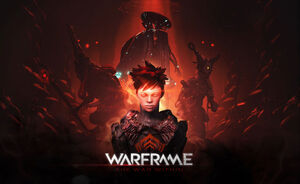 A promotional image for the War Within quest, depicting the Queens, a Tenno and Teshin.
Add a photo to this gallery

Retrieved from "https://villains.fandom.com/wiki/Grineer_Queens?oldid=3973884"
Community content is available under CC-BY-SA unless otherwise noted.