Auctioning off his treasure

Alien Criminal
Gristo Lloyd is a squirrel-themed Gangler Monster and is the main antagonist in episode 26 of 2018 called Kaitou Sentai Lupinranger VS Keisatsu Sentai Patranger. Also he is equipped with a Mermaid Statue-like treasure called Les minuscules bulles.

He was voiced by Kenji Inoue.

Gristo Lloyd's head is an orange squirrel head with a black goblin head with a white beard, his Gangler safe was on the back, his body is green with white squirrel hands holding a brown acorn, his scarf is white, he has brown pinecone hands, his legs are orange and brown squirrel legs with green toe nails, his weapon the Guridonki is a brown acorn hammer.

Gristo Lloyd made his first appearance disguised as an Auctioneer at a shady auction where he was about to sell a Les minuscules bulles (which translate as Tiny Bubbles) Mermaid Statue to the highest bidder. However before anyone could get the statue the lights went out and once it was turned back Gristo stole both the statue and money to make a get away. However while out in the forest he was stopped in his tracks by the Lupinrangers, so instead of giving it back to the thieves he's puts the statue back in its safe and attack the Lupinrangers and the Patrangers, but since he's in tight situation he'd used the treasures ability and made a hasty retreat.

However when the two masked thieves were back at the entrance auction Gristo still disguised as an auctioneer gives the amount of money for stolen loot which is roughly $2,160,000 bucks, but Noel gives the exact mount to him.

A while later back at the Gangler's Mansion Gristo Lloyd was happily feasting on the nuts while being happy about his plan, which is used his treasure as a decoy for bidders when he sells it an auction.

Then disguised as an auctioneer is about to assist in this fake auction that was set up by Noel, so that way he can tell which of these bidders is a gangler in disguise. Since none of the shady bidders is a gangler in disguise turns out it was the auctioneer that Gristo disguised as when Noel revealed him. Once his cover was blown he'd battle the thieves and Noel. During the fight both Lupin Blue and Red holds Gristo Lloyd in place while Noel gained access to his safe (which his password is 0-2-7) and got the Mermaid Statue that he'd bid on after that he was taken out by the thieves.

However thanks to Goche Ru Medou he was enlarged and battles Lupin Kaiser and X Emperor Gunner, after that he was then destroyed by the two bots. 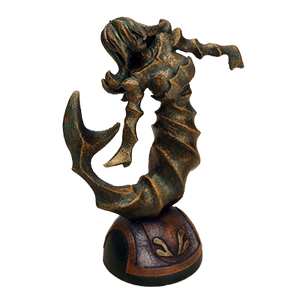