Grit (Japanese: ビリー) & (English: Billy) is a CO for Blue Moon and an antagonist in the first Advance Wars game. He was a member of Orange Star before leaving to join Blue Moon.

Grit was originally a CO from Orange Star who was friends with Max and Nell, having studied together with them at the military academy. However, Grit left the army after they attempted to invade his hometown. He later fended off Blue Moon when they attacked his hometown as well. Impressed, Olaf offered Grit a position as a CO for Blue Moon, an offer which Grit accepted.

He was ordered by Olaf to stop the Orange Star when they attempted to reclaim their invaded territories, and is fought right after him. However, after Black Hole's deception is revealed, he and the other Blue Moon COs join the effort in stopping Black Hole.

In Advance Wars 2: Black Hole Rising, he defends Blue Moon's territory from Adder and his Black Hole forces. He quickly develops a personal hatred of Adder when he hears that the Black Hole CO has been destroying cities and mistreating civilians. Eventually, Grit and the other COs succeed in driving Black Hole out of Blue Moon.

He is incredibly good at planning military strategies and indirect attacks, though he doesn't really care for the war with Orange Star, even noting that much of the land he is defending was seized from Orange Star in the first place. He is shown to be calm and laid-back, as well as showing no respect for his superior, Olaf. Despite this, Olaf keeps him around due to how good he is as a tactician. 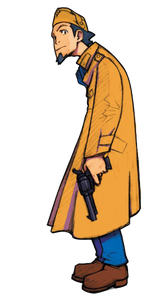 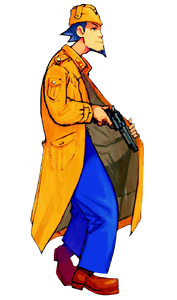 Grit in Advance Wars: Dual Strike.
Add a photo to this gallery

Retrieved from "https://villains.fandom.com/wiki/Grit?oldid=3933218"
Community content is available under CC-BY-SA unless otherwise noted.