Father of Monsters (both in G4)

My Little Pony and Friends

Ruler of Tambelon (in G1)
Ruler of Equestria (in G4; formerly)

The G1 version of Grogar appears only in the four-part episode " The Return of Tambelon" as the main antagonist. He is an evil demonic ram sorcerer and the leader of a kingdom named Tambelon, who once ruled Ponyland with an iron hoof 500 years ago before he was defeated when the ancient bell was rung. This banished him and the city to the Shadow World.

He then returned to Ponyland 500 years later, capturing all the Unicorn Ponies one by one and plans to capture everyone in Dream Valley to be banished to the Shadow World. He has a cold and antagonistic personality, always scolding Bray for his mistakes and sometimes abuses the Troggles so they can follow his orders and do what he wants. Grogar's powers come from the bells on his neck, and he has superior magic skills far beyond any Unicorn Pony that ever existed.

Grogar was defeated again by Megan after she rang the ancient bell for the second time, destroying the bell containing his power and banishing him and the whole city back to the Shadow World.

It is said he is unlikely to escape the Realm of Darkness again.

The G4 version of Grogar appears as the posthumous antagonist of the series, My Little Pony: Friendship is Magic. He is first mentioned in the Season 7 episode "A Flurry of Emotions". His story was told in the book called "Gusty the Great". Millenia ago, long before the three pony tribes came together as one, Grogar was the supreme ruler of the land that would be later be called Equestria. Wielding a powerful artifact known as the Bewitching Bell, he created terrible monsters to terrorize the populace and ruled his domain with an iron hoof, until he was confronted by a pony named Gusty the Great and her Unicorn Warriors. As told in the book by Twilight Sparkle, he encountered them on top of the hill that leads to Cloudsdale. The unicorn warriors shot magical beams into the clouds and wrapped around Grogar and pulled him to the ground, but the evil ram managed to break through the bonds as fear gave him power. The rest of the conflict was left unknown due to the interruption by Flurry Heart, but in Season 9, it is revealed that Gusty took his magic bell and banished him.

In the ninth and final season, the redeemed spirit of chaos, Discord disguises himself as Grogar, in hopes of preparing Princess Twilight to take over as ruler of Equestria when Princesses Celestia and Luna retire. Using this disguise, he then creates a syndicate of the most dangerous villains in Equestria, believing that the combined threat would pose an even greater challenge for Twilight and her friends. These villains include the former tyrant of the changelings, Queen Chrysalis, the power-hungry centaur, Lord Tirek, and the treacherous pegasus filly, Cozy Glow. He even revives the dark unicorn, King Sombra, who was previously deceased, though he refused to work with him, which got him destroyed yet again.

After cementing his place as their leader, "Grogar" then later sends the villains on a mission to retrieve the real Grogar's Bewitching Bell, which was hidden in an enchanted cave atop Mt. Everhoof. Even though the villains claim to have failed to obtain the bell, they did learn to work together, which was apparently enough to please "Grogar". Unbeknownst to him, they actually did get the bell but kept it so that they could use its power to betray him and take Equestria for themselves, which they did near the end of the season. Using the bell, they gained new super forms and then drained "Grogar" of his own magic, which revealed him to actually be Discord in disguise.

The existence of the Bewitching Bell means that Grogar was indeed real in history and Gusty the Great had banished him successfully, never to return again. He only ever appears in illustrations or flashbacks. 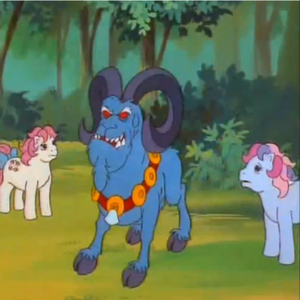 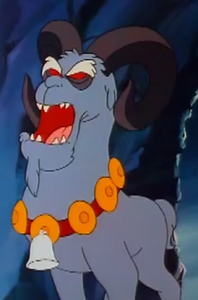 Grogar and his right-hand Bray.

Grogar's defeat.
Add a photo to this gallery 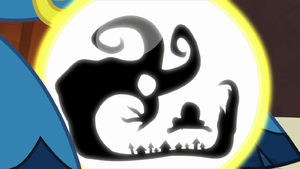 Grogar in a flashback of when he ruled Pre-Equestria in G4. 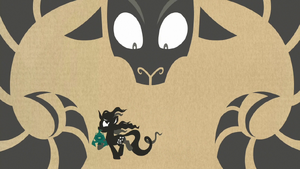 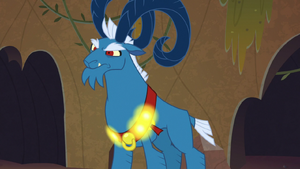 Discord posing as Grogar in G4. 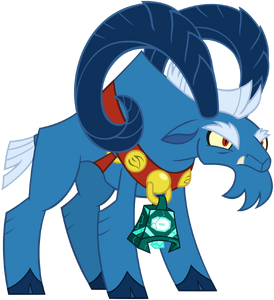 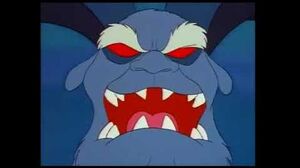 Retrieved from "https://villains.fandom.com/wiki/Grogar_(My_Little_Pony)?oldid=3433672"
Community content is available under CC-BY-SA unless otherwise noted.