Maintain their control over the galaxy through the Galactic Federation

Gromflomites are major antagonists in the adult animated science fiction sitcom Rick and Morty. They are a species of insectoid aliens originating from Gromflom Prime. They were the leading species of the Galactic Federation until its eventual collapse in the season three pilot episode called "The Rickshank Redemption".

At some point in time, the Gromflomites took control of the Galactic Federation. Gromflomites are shown to comprise the entire upper echelon of the Galactic Federal government, as well as most of their military, the latter referred to as the Galactic Militia. At least one Gromflomite, Krombopulos Michael (an assassin), has taken on jobs that sometimes require action against the Federation, including the killing of Federation-aligned Gromflomite guards, suggesting that the species as a whole may not be loyal to the Federation. The majority of Gromflomites depicted on the show happen to be soldiers, but they are otherwise not implied to be a wholly militaristic society, with civilian Gromflomites making some appearances. Any other information on their historical background is unknown. They would continue their control in the universe and the Galactic Federation until Rick Sanchez eventually dismantled it after escaping on their maximum security prison. Rick accomplished this seemingly difficult task by changing their intergalactic currency from a one to a zero.

The Gromflomites make their first appearance in season one, episode one, called "Pilot". They are seen acting as security guards for inter-dimensional customs. They pursue Rick Sanchez and Morty Smith after Rick tells Morty to run when one of the Gromflomite security guards mention that they have a new machine that "detects stuff all the way up [someone's] butt" (Morty has mega-seeds in his rectum). Rick destroys several things in the customs to slow them down and also assaults two aliens who are bystanders with one of the aliens (the overweight red skinned alien with tusks, blue eyes, and a streak of green hair/feathers) left crying after Rick slaps him in the face and destroys his alien hookah. Using the grappling shoes and other methods of avoidance, the two manage to get to a portal, but Rick has to enter the coordinates of their home dimension. As the guards begin to shoot at them, Rick tells Morty to shoot back at them, telling him that they are robots. When Morty shoots one of them, however, he finds that they are not robots but living organisms. Rick explains that he was using a metaphor: the guards are bureaucrats and he does not respect them. They are then able to go back to their home dimension and escape the Gromflomites.

They next appear in the season two, episode two, called "Mortynight Run". They are seen trying to stop Rick and Morty from taking an alien known as Fart to his home dimension, due to his abilities to produce gold which they could use to expand their influence in the universe. However, they fail to do so (although Morty kills Fart in order to stop him from bringing the rest of the race to kill everyone). The Gromflomites make another appearance in season two, episode ten, called "The Wedding Squanchers", which is also the last episode in the season. They make themselves known after Tammy Guetermann reveals that she is an undercover Galactic Federation agent. The Gromflomites then ambush the wedding party guests and chaos ensues wih Birdperson getting killed. Despite this, Rick is able to kill several of the Gromflomites before escaping with his family. They would later arrest Rick at a bar and take him to a maximum security prison after he poses as Jerry to tip them off on his location in exchange for his family to be spared, and it's revealed that the Galactic Federation are not after the Smiths, just Rick Sanchez.

The Gromflomites make their last known appearance in season three, episode one, called "The Rickshank Rickdemption". One of them appears as a Galactic Federation agent, known as Cornvelious Daniel, who is present in Rick's subconscious (Rick is still in their prison). He tries to get Rick into revealing any information that could be useful to his organization. After Daniel gets the information that he believes is useful, he attempts to leave and let Rick die. Unfortunately for Daniel, the information was actually a virus that gave Rick control of the entire system, and the "memory" they visited was a completely fabricated origin story. Rick transfers his consciousness out of the brain-link into the physical body of the agent.

At this time, a Council of Ricks Seal Team shows up to try to kill Rick so he doesn't expose any secrets connected to them. They kill all the Gromflomites in the room, but Rick is able to transfer his consciousness from Daniel's body into a seal agent. Rick then uses this new body to kill the rest of the agents and eventually reaches the teleportation control room of the Citadel of Ricks. He teleports the entire Citadel back into the middle of the Federation prison, resulting in a heated battle between the two sides. Rick C-137 infiltrates the Council chamber and kills most of the Council of Ricks before ending up in a standoff with the final member, attempting to use Summer as a hostage. With a clever bit of trickery, Rick and Morty combine efforts to save Summer and escape back to Earth, but not before Rick returns to the prison's control room and sends the Galactic Federation's currency plummeting to zero. With the economy in shambles, the Federation follows suit, sending the whole galaxy into chaos and resulting in many aliens leaving Earth. 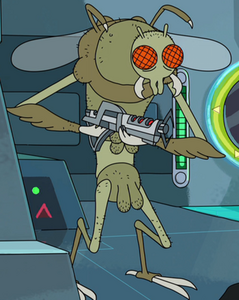 The inside of a Gromflomite's groin

Two Gromflomites after the collapse of the Galatic Federation 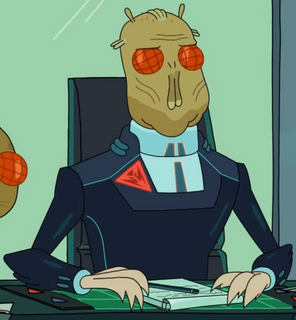 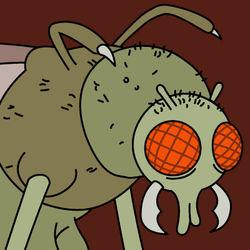 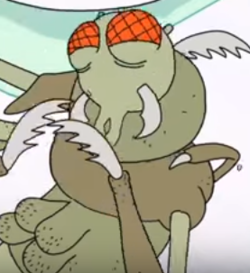 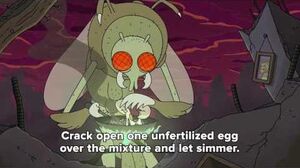 Rick and Morty Galactic Federation - HOW TO PREPARE YOUR UNBORN HATCHLINGS 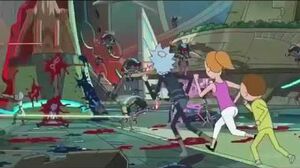 Rick and morty - how Rick destroyed the Galactic government.-0 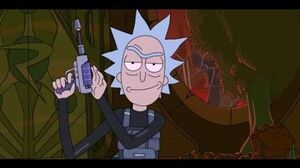