Team leader of the G-Men

Superhuman strength
Skilled use of his hammers

Defeat The Boys. (both failed)

Ground Hawk is a minor antagonist of the controversial comic book series The Boys. He a member of the superhero team, G-Men despite being an almost mindless, feral supe.

Almost nothing is known about his previous life, but it is assumed that just like other G-Men members, he was kidnapped as a child, given Compound V, and trained to become a superhero as well as the leader of the G-Men. His animalistic needs to kill people with his hammer-hands, his fearlessness, and inability to speak proper words other than his phrase "Gonna" is a result of the side-effects caused by Compound V. Due to the fact that he has hammers for hands, his teammates normally feed him during lunch. However, he is rather cannibalistic and would normally eat his enemies/victims alive.

Ground Hawk is first seen in the comics growling and preparing to engage at Hughie Campbell but is soon stopped by one of his teammates. Vought would become concerned with G-Men's founder John Godolkin, who is selfish, greedy, and sexually abusive and becomes too much of a problem for the mega-corporation to deal with. Ground Hawk leads the G-Men and the G-squads such as G-Force, G-Wiz, and the G-Style as they decide to take a stand against Vought's attempt at taking down Godolkin. They foolishly underestimate Vought's power and tech, that's when Vought forces fire bullets and bombs into the crowd and kill every single one of the G-Men including Ground Hawk himself.

On the Vought News Network, Cameron Coleman reports on Ground Hawk being sent to the Vought Wellness Center to battle his alcoholism after attacking various police officers near a local bar.

He appear's in the animated spin-off series The Boys Presents: Diabolical.

Superhuman durability- Due to Compound V, he gained superhuman durability which prevents him from dying as well as withstanding fatal wounds and damage without being weakened. Despite this, overwhelming firepower will eventually kill him, just as it does it teammates.

Super strength- Ground Hawk is strong enough to fight off countless people with ease as well as flip over a car with his hammers.

Skilled use of his hammers- Ground Hawk has two hammers where his hands should be, which is considered a great difficulty for him as he can't grab things. However, said hammers are lethal can smash a person's head with one hit.

Geound Hawk as a member of the core G-Men. 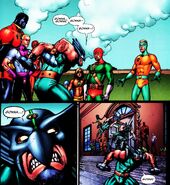 Ground Hawk struggles to drink due to his hammer hands. 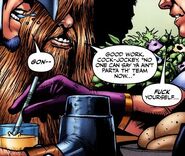 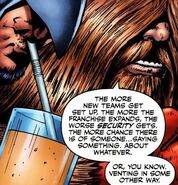 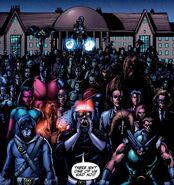 Ground Hawk and the G-Men confront The Boys and confess their undying loyalty to Godolkin. 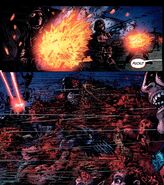 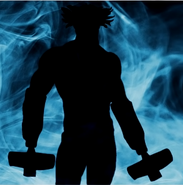