Create a mega park
Destroy Wonder Wharf
Kill Bob and his family for figuring out he's the murderer (all failed).

He is the cousin/lawyer of Calvin and Felix Fischoeder, and the murderer of Cotton Candy Dan.

He is a thin Caucasian man, with short brown hair, and large round glasses. He wears a pink suit with a white undershirt, and a purple bowtie. He also has pink pants, and white shoes.

Grover was shown to be very intelligent on the subject of law. He was very skilled in finding legal loopholes that concerned whatever crazy shenanigans his cousins were getting up to. Even when subjects involved common knowledge, he would begin by stating that "as your lawyer, I must advise...". Grover shared his cousin's interests of participating in shady business, an example of which might include the "snail wrestling" event that he attended in his debuting episode.

During the movie, he was revealed to be a very evil man willing to kill innocent people just to fulfill his selfish desires. He never really cared about his cousins, instead planning to frame them for murder and then turn their Wonder Wharf into what he calls his "Mega Park". He planned out several murders and even a fire in a way that wouldn't make investigators suspect him. While frustrated, he was revealed to often describe things as "stupid".

Six years ago, Grover murdered Wonder Wharf carnie Cotton Candy Dan, using his cousin Calvin's gun (in the struggle, Dan bit him and ate his cufflink), hid his body in a pile of dirt with the hope that Calvin would be accused immediately. However, a construction driver took the dirt and used it to fill a hole close to the Belcher family's restaurant, completely unaware of the body.

Grover made his debut in the season 9 episode Roamin' Bob-iday. Calvin Fischoeder arrived met up with him and Felix after driving Bob around in his go-cart. After introducing him to Bob, Bob asked what they were doing in the neighborhood they were in, and so Grover explained that they were running a "private social club that was well within it's rights to host animal strength contests". Calvin told Bob that they were hosting snail wrestling, Grover replying by telling Bob that if he were to be joining them then he would need Bob to sign a waiver. Bob declined and left while Grover nervously denied the presence of snails at their club.

Grover was next seen in Felix's underground nightclub. After Felix requested that tiny lampshades be put on the candles, Grover appeared and told Felix that he was the one that told the waiter to take them off because they were a fire hazard. He appeared again to tell Felix to not knock down a wall because there was a sewage line behind it. After Felix left, he and Calvin began murmuring and laughing to each other. When Bob asked what was up, they told him it was nothing and walked off. When Bob overheard them again, they revealed that they didn't get any permits for the nightclub, because they knew that Felix would soon be bored of it. After Felix gave it up, they planned to make the establishment into a private storage unit. Although this plot point continued, Grover is not seen for the rest of the episode.

After a massive sinkhole opens up in front of the Belchers' restaurant, the corpse of Cotton Candy Dan is revealed, putting Grover's frame job back on. The police find the bullet from Calvin's gun, as well as Grover's cufflink. Grover's plan works, Calvin is quickly charged with the murder, and arrested. Later on, he goes to the secret Fischoeder clubhouse, with the intention of completing his "master plan." Unfortunately he finds that the Belcher kids are there, trying to solve the murder. Louise tells him they think it's Felix Fischoeder, Calvin's brother, Grover reveals that in actuality, Calvin and Felix are planning to flee the country. However, Louise manages to put it together that Grover was the killer, leading to Grover having to hold everyone hostage with a speargun.

The Belcher parents tumble into the clubhouse, and are added to the hostages. Grover reveals his motive and plan. After being bullied and ridiculed by Calvin and Felix (who he considered to be squanderers of their fortune) for ages, Grover decided he'd had enough, and came up with a plan to get Calvin charged with murder, so he'd get money via family trust, investing in an expensive MEGA PARK to replace the old Wonder Wharf. The last step is to get the Fischoeders out of the way by trapping them under the pier in an old submarine themed ride, and setting the pier on fire so it collapses on top of them, crushing and killing them, with the alibi of him being at the gym for three hours, as he snuck out.

He traps his cousins in the submarine, but the Belchers sneak into the pier's storage area, and escape in a cart. Grover pursues them with his speargun and another cart, chasing them all the way back to their house, and shoving them into the sinkhole, burying them alive. He ignites the fuse, and runs back to the gym to solidify his alibi.

Luckily the Belchers get back in time and are able to stop the fire, saving the pier, Fischoeders, and the whole town. Louise calls the police, and they head to the gym and arrest Grover as he's exiting, foiling his scheme once and for all.

Grover has one more appearance during the end credits, dancing, while wearing a prison uniform. 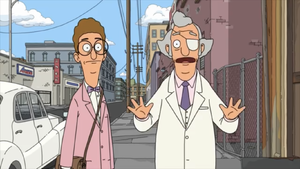 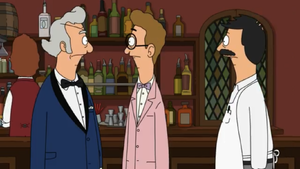