Villains Wiki
Register
Don't have an account?
Sign In
Advertisement
in: The Lion King Villains, Kids, Book Villains,
and 13 more

To get rid of Pumbaa (failed).

Growler is the son and eldest child of an unnamed female warthog, the older brother of her other children and the main antagonist of Pumbaa's New Friends, a story from the Hakuna Matata series, a set of magazines based on The Lion King.

When Pumbaa comes to temporally live with Growler's sounder, the younger warthog takes a dislike to him, seeing Pumbaa as a disgrace to all warthogs due to his poor hunting and many other things warthogs are supposed to be good at. However, Growler's mother enjoys Pumbaa's company and teaches him to be a real warthog.

Jealous of the attention Pumbaa is getting, Growler decides to get rid of him by tricking the Chief Warthog and the other male members of the sounder into thinking that Pumbaa is planning to take over the land. Next, he tricks Pumbaa into thinking they're going to play a fun game but instead leads him into a trap and leaves him surrounded by the Chief and the males. But after leaving, Growler runs into Pumbaa's friends: a meerkat named Timon and a lion cub named Simba who force him to tell them where Pumbaa is. After hearing that Growler led Pumbaa into a trap, Growler's mother banishes him from the sounder, calling him a disgrace. Luckily, Timon and Simba are able to stop the Chief and the males from attacking Pumbaa and reveal that Pumbaa isn't a threat and that Growler had lied them.

Growler is a dark grayish-brown warthog with short tusks, a black mane and dark red eyes. 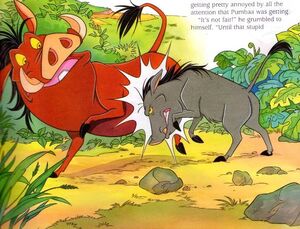 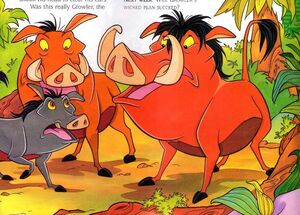 Growler tricking the Chief Warthog into thinking that Pumbaa wants to take over.