Find Nimue the Blood Queen's remains in order to restore her (succeeded).

Kill Hellboy and his allies (failed).

Gruagach is the secondary antagonist of the 2019 live-action superhero reboot film Hellboy. He is a monstrous boar-like fairy who was hired by Baba Yaga to find the remains of Vivienne Nimue in order to restore her and to also exact revenge on Hellboy.

In 1992, Gruagach and his fellow fairy folks kidnapped baby Alice in hopes of restoring their dying race with Gruagach himself acting like her changeling. However, Hellboy exposed him and branded Gruagach with iron before setting out to reclaim the real Alice. The vengeful Gruagach tried to stop the cambion only to be driven away with the attempt turned him into a humanoid boar he is now.

Seeking to end his feud against Hellboy, Gruagach consulted with Baba Yaga for the means to defeat their common nemesis. Through their conversation, it's revealed that the former has learned about the legendary dark witch Nimue and that she has the power to turn their tide against the cambion. As such, Baba Yaga implored Gruagach to gather up Nimue's remains all over the world in order to restore her.

The Search For Nimue's Remains

Upon entering a church where Nimue's severed head is being hidden, Gruagach slaughtered the silent monks within and coercing the last one for it. Finding Nimue's head, he demanded to the monk to speak the incantation to unseal it, only to be forced to do the deed himself when the monk vehemently refused. Ripping off and consuming the monk's severed tongue, Gruagach gained the knowledge over the incantation and successfully recited it, awakening Nimue. As a severed head, Nimue instructs Gruagach on where to find the rest of her body which he succeeded.

Gruagach participated in the massacre the Osiris Club, killing multiple members in brutal ways. When Hellboy and his team find the people killed, Hellboy somehow runs into Gruagach as he is taking the last piece of Nimue with him and seemingly recognizes the fairy as his old enemy. Hellboy fights Gruagach and goes after him, but Gruagach escapes after Nimue distracts Hellboy with a vision and plays with his mind over his feelings about how non-human creatures are treated. Hellboy recalled Gruagach, remembering when he first encountered the fairy back in 1992.

When Hellboy and his allies later arrive at the church in London, Gruagach confronted them. Although Hellboy and Ben Daimio shoot at him, Gruagach's durable skin deflected their bullets. Gruagach tells Hellboy that he doesn't know how long he's waited to kill him, but the latter provokes the creature as his allies move away before they fight. During the ensuing fight, Gruagach bests Hellboy with his enhanced strength and durability and impales him with one of his tusks. However, Hellboy broke off one of them, and stabbed the demon in the head.

Gruagach allows him to fall to the ground, mocking Hellboy before stating that he will allow him to lay there as he kills him. Before he can finish off Hellboy however, Daimio transforms into a monstrous jaguar and attacks Gruagach. Despite being attacked by Hellboy and Daimio, he easily defeats both of them, and attempts to crush Hellboy's skull. Gruagach is however stopped by Nimue, but he reminds her that he was the one who resurrected her and that they made a deal. However, Nimue betrays Gruagach by making him shrink down to size. Before his death, Gruagach screams that it wasn't fair and angrily curses Hellboy just before his body explodes into a bloody mess. 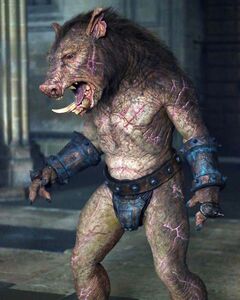 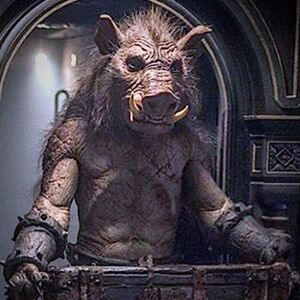 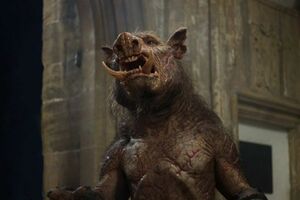 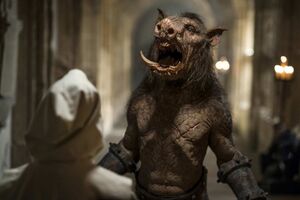 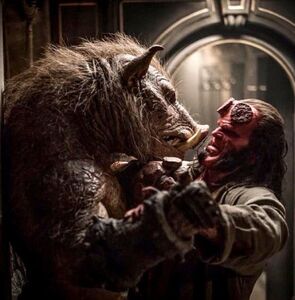 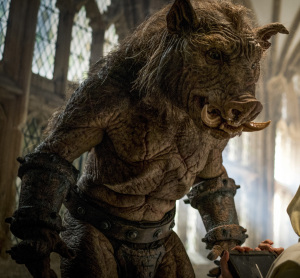 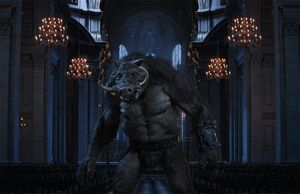 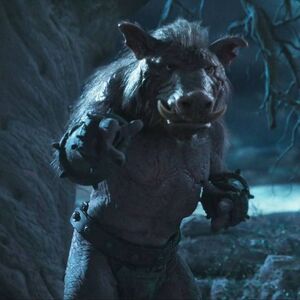 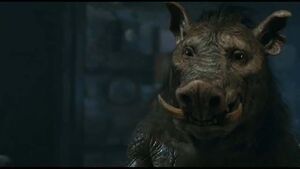 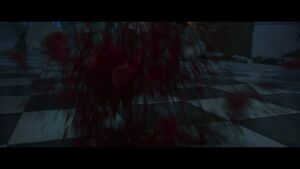 Gruagach's death.
Add a photo to this gallery 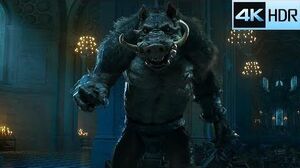 Retrieved from "https://villains.fandom.com/wiki/Gruagach_(Hellboy_2019)?oldid=3465410"
Community content is available under CC-BY-SA unless otherwise noted.