CEO of the Glitz Pit (formerly)

Announcing Fights at the Glitz Pit.

Taking the life force of anyone who he suspects is on to him.

Get rid of anyone in his way.

Keep his body young and healthy by stealing life from his enemies (both failed).

Grubba, also known as Macho Grubba, is a major antagonist in the 2004 video game Paper Mario: The Thousand-Year Door, serving as the main antagonist of Chapter 3 and the unseen overarching antagonist of the Glitzville Sequel sidequest.

Grubba initially has the personality of a typical businessman. He is charismatic and loves to exaggerate things so he can get opportunities to expand his business (Mainly persuading fighters to join the Glitzpit). Grubba also loves when his fighters do very well, congratulating them and giving them bonuses for hard work.

Grubba also seems to care a lot about manners as he constantly nags people who don't knock on the door unless they are new to the Glitz Pit, usually in the case of a new fighter (though after learning what he's really up to later on, in retrospect, this is likely because he doesn't want someone to happen to walk in on him when he's doing or saying anything suspicious related to his true motives).

Grubba's true nature is quite different though. He seems to have no regard for others and believes he can do whatever he wants no matter how terrible it is as long as he is stronger than his victim. He is also cunning and tends to scheme when he is all alone, having no problem admitting his evil intentions and actions when alone out loud, though this allows him to be eavesdropped on more easily.

Not much is known of Grubba's past, but he claims to have lived in poverty most of his life before training to become a fighter. When he got too old to fight, he ended up becoming the host of the Glitz Pit. He claims that at one point certain moves he used had to be made illegal.

Grubba is first seen hosting a fight between Rawk Hawk and the Koopinator, with Mario watching the fight in the background. When Mario realises that the champion's belt Rawk Hawk is wearing looks like a Crystal Star, he decides to meet Grubba and get himself signed up to the Glitz Pit so he can win the belt.

As time goes on, Mario ranks up in the Glitz Pit and forms a bond with both Grubba and some of the other fighters at the Glitz Pit. At one point, two fighters, Bandy Andy and King K, go missing. Mario finds them with their energy drained and left for dead with help from a mysterious mail sender called X.

Eventually, after winning the Champion's Belt, Mario is told by X to sneak into Grubba's office, where he and his partner find a piece of paper which indicates that he secretly has an energy draining machine hidden underneath the Glitz Pit stage, which he had used on Bandy Andy, King K and Prince Mush, the former champion who is also the brother of Grubba's assistant Jolene. When Grubba finds this out, he flees to the stage and reveals that he used a Crystal Star to power the machine. He uses it to give himself power, transforming himself into Macho Grubba, and foghts Mario, though ultimately losing in the process.

After Mario and his partner defeat Grubba, Jolene appears and reveals that she was X all along. Prince Mush and the other victims of Grubba are shortly revived afterwards. To avoid a similar situation happening again, Jolene gives Mario the Crystal Star and takes over the Glitz Pit. What happens to Grubba next is unknown. 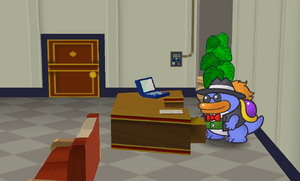 Grubba looking at papers regarding his life-draining machine in secret, foreshadowing his true nature. 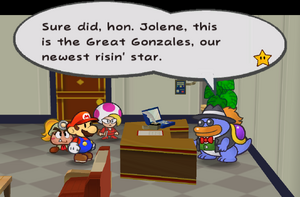 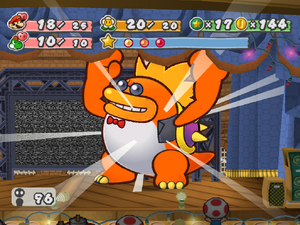 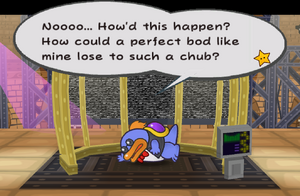 Grubba after he is defeated. 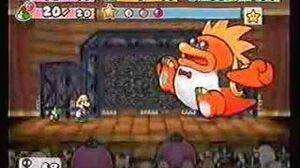