Later on, Grumblemon attacked Takuya and his friends again, who were looking for Koji. He once again defeats them and stole Zoe’s Spirit. Koji Spirit Evolved to Lobomon to fight Grumblemon. Gigasmon went in pursuit of him, and defeats Lobomon, reverting him back to Koji. Gotsumon tries to block Gigasmon, and the temples shot Gigasmon. Koji was able to Beast Spirit evolve into KendoGarurumon for the first time and knock Gigasmon into the ocean below.

Grumblemon appears again when Takuya and Tommy were trying to pull their friends out in the mud. He Slide-Evolved to Gigasmon and kidnaps Tommy, and Takuya became Agunimon, trying to rescue Tommy, but no avail. Takuya then Beast-Spirit evolved to BurningGreymon and was able to save Tommy from Gigasmon’s clutches. He then goes after Gigasmon, chasing him out of the woods. Gigasmon attempts to take Agunimon down with his Tectonic Slam attack, but misses. BurningGreymon attacks Gigasmon, and finishes him off with his Wildfire Tsunami attack. Then BurningGreymon took Grumblemon’s Beast Spirit, and gave Tommy his Spirit back. Just as BurningGreymon was about to take back Zoe’s Spirit, he was reverted back to Grumblemon, and retreated, much to Zoe’s dismay.

Ogre type Digimon that has succeeded the power of AncientVolcamon of the Ancient Warriors of legend, his attribute is earth. He is a manipulative craftsman who has made his own weapons and armor. He is abhorred when he is ordered around by other people. He equipped with the "Grotto Armor" and the "Grotto Hammer". 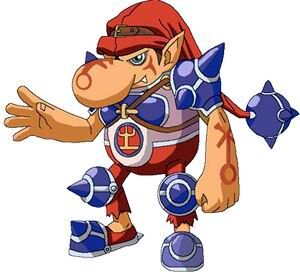 Retrieved from "https://villains.fandom.com/wiki/Grumblemon?oldid=2882077"
Community content is available under CC-BY-SA unless otherwise noted.