Henchman of the Joker

Kill the others and get all money for himself (failed).

Grumpy was a minor antagonist in the live-action film The Dark Knight and an accomplice of the Joker in the robbing of Gotham National Bank.

He was portrayed by Danny Goldring.

Along with Chuckles and Bozo (actually The Joker in disguise), Grumpy was one of the three thugs who took over the bank lobby, while Dopey and Happy disabled the alarm system and cracked open the safe, respectively. When he's reminded about they may have to split it into six shares instead of five, because they have to count the one who planned the heist, he implies that they might just run off with their shares of the money and not pay the Joker his cut. When Chuckles was killed by a surprise gunshot from the bank manager, both Bozo and Grumpy dove for cover. Bozo tricked Grumpy into taking the manager's last round, though the wound was not fatal, causing Grumpy to angrily ask Bozo "Where did you you learn how to count?!".

With the lobby pacified, Grumpy made his way to the safe, shot Happy after he had opened it, and loaded the safe's cash into bags.

Realizing that both Happy and Dopey had both been killed on the Joker's orders, and remembering the trick Bozo pulled earlier, Grumpy believed he was next and aimed his gun at Bozo, who walked in a circle as Grumpy kept aim at him and maneuvered him into standing in just the right place; as Grumpy exclaimed that he bet the Joker told Bozo to kill him as well as soon as the cash was loaded, Bozo corrected him and said "No, no, I kill the bus driver". Grumpy, confused, demanded to know what bus driver he was talking about. He was then hit and killed by the getaway bus, being driven into the bank's lobby by the bus driver in question, who was soon killed by Bozo as well. 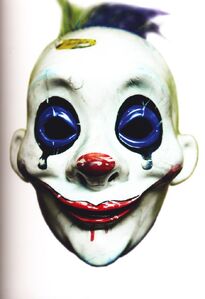 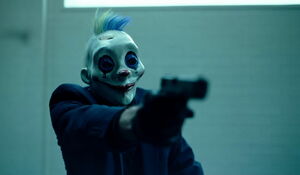 Grumpy killing Happy.
Add a photo to this gallery 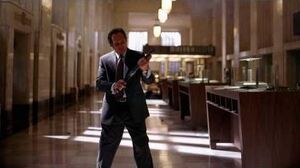 The Dark Knight "You and your friends are dead!"
Add a photo to this gallery

Retrieved from "https://villains.fandom.com/wiki/Grumpy_(DC)?oldid=3915773"
Community content is available under CC-BY-SA unless otherwise noted.