Protect Great Principality of Grant from any invaders (ultimately succeeded).
Protect those who are dear to him (failed).
Exact vengeance upon all those who betrayed and abused him.
Find and serve the Hawk of Light (both succeeded).
Kill Guts and his party.
Remove any potential threats to Griffith.
Aid Griffith in his quest to solidify his position as a ruler of Falconia (all ongoing).

Grunbeld Arcbeast, simply called Grunbeld and also called the Great Flame Dragon, is a major antagonist in the late Kentaro Miura's epic dark fantasy manga Berserk. In the Berserk spin-off novel Berserk: Knight of the Flaming Dragon in which Grunbeld features as the novel's protagonist, tells how the heroic Grunbeld forsook his humanity and became an apostle.

Grunbeld is a member of the reformed Band of the Hawk, and along with Zodd the Immortal, is an exceedingly strong apostle, who is more powerful even in his human form than typical Apostles in their transformed states. He is a giant, red-haired man in scale plate armor that resembles a dragon and armed with a heavy warhammer (it takes a group of adult men to barely lift it) and a shield containing a hidden cannon and dual blades. He is renowned as a famous war veteran in the northern part of the continent where he apparently held ground against a superior, overwhelming force of three thousand from Chuder Empire, lasting for months on end.

Being a towering and hulking warrior and the strongman of the new hawks, he could pose as a counterpart to Pippin.

While a monstrous Apostle, Grunbeld is still a man of pride, and talks more akin to an old warrior than a sadistic demon. He is a serious man who is not keen to jokes.

However, Guts calls him out on his supposed "ethics", stating that monsters like Grunbeld should not pretend to have human qualities such as a warrior's code or pride. While debatable, Guts' accusation makes sense; the fact that Grunbeld became an Apostle means he has sacrificed those who loved and trusted him, something that is unacceptable to any humans with morality. Even before all these, above and all Grunbeld is an Apostle, a powerful being that transcends humans. So asking for a duel 'with dignity of a warrior' as if he is still a human would make very little sense. But little did Guts know that Grunbeld's path to become an Apostle is not as simple as Guts thinks, at least for Grunbeld.

Much of Grunbeld's background remains unknown, but it is further explored in Berserk: Knight of the Flaming Dragon, regarding his path of becoming an Apostle.

His first appearance was during chapter 184 where he engages in killing many imperial soldiers of Kushan. When Kushan soldiers who are not fighting either Zodd or Locus attempted to lock the main gate to prevent Griffith's potential escape, the castle gate is smashed open from the outside, killing a Kushan unlucky enough to be closest to it. Through the gate's ruins emerges Grunbeld. Grunbeld then proceeds to slaughter any Kushans he sees with his warhammer and deadly arsenals hidden in his shield (cannon and dual blades). When the carnage stops, the battle won and with another liberation of territory from Kushan completed, Grunbeld, along with Locus and Zodd, bows to Griffith. He along with Band of Hawk continues to save Midlanders and liberate occupied territories in chapters 192-193, saving a young nobleman named Mule Wolflame and his militia in the process.

He later saves Mule and Sonia from unruly Apostles intending to harm them, and explains to Apostles that Sonia and Mule are honored guests of Griffith therefore not to be harmed. Grunbeld then advises Sonia to consult him before coming to where Apostles reside. (which happens to include short cut to meet Griffith). Apostles addresses Grunbeld by name, and Mule realizes that Grunbeld is the man from the Hundred-Year War.

He is later seen again in volume 26, where he is assigned to kill Flora the witch. Although not enthusiastic about killing an old and fragile woman, he nevertheless embraces his mission to prove his loyalty to Griffith. While having a stand-off against Skull Knight who comes to defend Flora's final moment and her right to die with dignity, Guts and his party stumble onto Flora's burning Mansion of the Spirit Tree. Grunbeld first requests Zodd to yield Guts to him; Zodd, intending on settling his rivalry with Skull Knight, approves. Grunbeld, stating that he had heard about Guts as an infamous Apostle-slayer, challenges Guts to a duel, either unaware or ignoring of Guts' poor physical condition (who just barely survived a near-fatal encounter with Slan of God Hand).

Grunbeld addresses himself as the member of Band of the Hawk, enormously aggravating Guts. As Grunbeld fights Guts, the first part of duel was undeniably unilateral in which Grunbeld completely wipes the floor with exhausted and wounded Guts, reopening the swordsman's wounds and creating new ones. Grunbeld begins to doubt that Guts is the famed Apostle-slayer. Stating a disappointment at Guts' lack of power (but the knight was impressed with Guts' Dragon Slayer, at the fact that it has not been shattered to pieces after taking some direct blows from his warhammer) Grunbeld attempts to kill Guts with his shield-cannon, stating that Guts is not fit to die by his warhammer. Guts was saved by Flora's Golems who took a cannon hit. While Grunbeld was distracted by Golems, Guts was guided by Shierke, who is instructed by Flora to deliver Berserker Armor to Guts. Guts limps his way to where Berserker Armor is.

Eventually doing away with all Golems, Grunbeld seeks out Guts, demanding him to come out and stop disgracing himself. Suddenly a sound of explosion draws Grunbeld's attention: an Apostle who went after Guts and his gang into a basement comes back out moaning in agony, who seemingly has eaten Guts only to be sliced into multiple chunks by Guts, who now dons Berserker Armor. Watching as Guts in Berserker Armor slaughters a few more Apostles, Grunbeld wonders if the armored man is the same weak man as he was a while ago. Guts, empowered by Berserker Armor (but at the expenses of his health and sanity), charges at Grunbeld, turns table on the hulking knight, starting with knocking aside Grunbeld's huge frame, breaking Grunbeld's weapons and has the giant on total defensive. Grunbeld's disbelief of Guts' such drastically changed combat prowess compared to mere moments ago is slowly replaced with outright shock as he realizes that Guts is fighting on a completely different level than any human is capable of. He hastily aims his cannon at Guts, who quickly (and without pulling its switch) fires his own arm-cannon into Grunbeld's shield-cannon, shattering the latter's shield completely.

Grunbeld, finally acknowledging Guts as his nemesis, attempts to kill Guts with his warhammer, but the second duel ends up with Guts wounding Grunbeld in the shoulder and breaking his warhammer. While conceding defeat as a human fighter, Grunbeld was not willing to call it quits yet: the Apostle knight reveals his Apostle form and in this form, Grunbeld is a quadruped dragon whose outer shell is composed of stylized corundum crystal formations harder than steel and is able to exhale flames from his mouth. Grunbeld first attempts to swing his massive corundum-encrusted tail towards Guts with tremendous speed, and the attack hits. But Guts manages to catch the Apostle's tail mid-swing, shocking the Apostle. But using only his own legs for support, one of Guts' legs breaks under the pressure of the massive force behind the tail's swing. But with Berserker Armor 'fixing' Guts' broken bones back into their places, Guts seems unaffected.

Guts uses the Dragon Slayer to stab Grunbeld in the face that is located on the front of dragon head. Though not killed, Grunbeld's face has been cracked open, and he uses the gigantic corundum spike on his head to knock Guts away. Then Grunbeld realizes that his supposedly harder-than-steel corundum skin has been damaged. Thanks to Shierke's effort to bring Guts back to his sanity, Guts steps out of the duel to save Casca and Farnese just as Grunbeld breathes fire on him. Having his duel interrupted, Grunbeld chases Isidro and Serpico, not intending to let any of Guts' associates get away. But Flora, using the last vestiges of her magical strength, becomes a giant flame form to Prevent Grunbeld and his Apostle army from chasing Guts and his party any further. Grunbeld shouts after them, but finds he cannot manipulate Flora's fire like he can with regular fire.

Grunbeld is later seen in Vritannis thwarting Emperor Ganishka's grand army's attempt to decimate Vritannis by slaughtering war elephants and preventing Ganishka's mobile fort ceiling from collapsing upon the Kushan tyrant's transformation, where Griffith has infiltrated. After losing that battle of Vritannis to Griffith, Ganishka treated to his castle of Windham and undergoes second transcendence to become a semi-deity in a bid to go beyond Apostle to best Griffith. Ganishka creates his own monster spawns to battle and kill Griffith. Grunbeld, along with Apostle army , participates in what is to be Ganishka's last battle against Griffith. After bloody fight, Grunbeld and Apostle army, under Griffith's leadership and with his final strike to the mad Kushan emperor, the battle is won and transforms the entire world into fantasy. Since then, Grunbeld had been assisting Griffith in his excursion to retrive any remaining humans and bring them to Falconia, a newly risen kingdom where Griffith rules as the king and savior of humanity.

As of chapter 356, Grunbeld assists in Griffith's campaign to exterminate man-eating Jotnars who threaten humans. 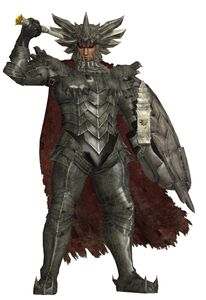 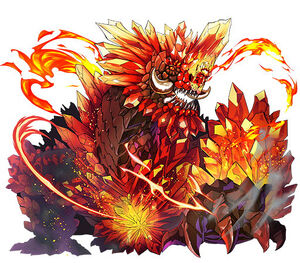 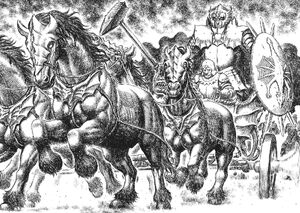 Grunbeld, when times were good. 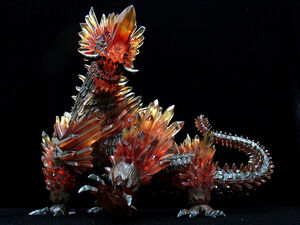