Having his revenge on the Thundercats.

Grune was a male Thunderian in the 1985 version of the Thundercats television series who later turned to evil.

As a young man he was a Thundercat, with all the enhanced skills that go with that title. His Great-Grandfather once served as Lord of the Thundercats. Grune was at one time a good friend of Jaga, and the two fought side by side.

Unfortunately Grune had ambition and a lust for power that corrupted his heart and turned him into a force for evil. He came to view the Thunderian populace as being unworthy of the services of the Thundercats, and became determined to rule them as a God.

Grune and his forces attempted a military coup, however they were met by Jaga. The two former friends fought for hours. Eventually the former Thundercat was defeated. As punishment he was exiled from Thundera in a crystal vessel.

The crystal vessel eventually made its way to Third Earth. Grune proceeded to terrorize the natives, who named him Grune the Destroyer. Eventually Grune died and became a spirit.

Upon discovering the Thundercats living on Third Earth, he became their most lethal enemy – an ethereal, ghostly force who cannot be harmed by physical assault. Grune attacked the Thundercats with but one goal in mind: vengeance, against the Thunderian race in general and in particular his old friend, now an ancient enemy, the spirit form of Jaga the Wise. 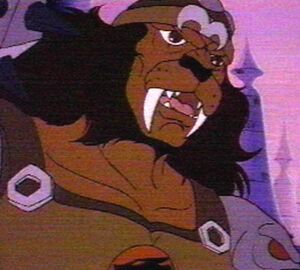 Grune on Thundera
Community content is available under CC-BY-SA unless otherwise noted.