Grunts are the lowest ranked units of the A.A.H.W. and antagonists in the Madness Combat series.

A large group of Grunts fought Hank J. Wimbleton after he killed the Boombox Man and stole his boombox. They were all defeated by Hank. Two of them were also resurrected as Zombies by Jesus and were later killed as well.

Many Grunts were seen working for the Sheriff's main line of protection against Hank. They opposed Hank in his mission to kill the Sheriff. Several were reanimated as zombies by Jesus at one point, but Hank re-killed them soon after.

Grunts were seen raving in Club M when Hank arrived. They all attacked Hank after he shot Tricky, who was working as a DJ at the club, but they were all killed by him. Soon after, Jesus arrived and resurrected all the ravers as zombies, but Hank just killed them again.

Grunts can be seen raving in the Flying Party that fell on Sanford and Deimos after they delivered Hank the dragon sword.

In addition to 1337 Agents, many Grunts fought against Hank, particularly when Hank entered the second building. It appears that the Grunts at this facility were going through the process of being promoted and upgraded to Agents during this episode, as signs can be seen in the last room showing the steps for their reassignment.

Two grunts were seen doing push-ups while being supervised by a l33t agent. After Hank landed on and killed the agent, the two grunts attacked him but were soon killed by Hank ripping out the heart of one of them and tearing off flesh from the other one.

After the Auditor interrupted a group of l33t agents' gambling, he bisected a Grunt with a dragon sword.

Hank's very first opponent in the series, Boombox Man is arguably the first antagonist in the series, as he punched Hank without any warning when he attempted to either turn down or take his boombox. After being killed by Hank by being punched in the head, he was revived by Jesus as the first Zombie, but was then killed again after Hank punched his head off his shoulders, then shot his body for good measure, with this act being the actual killing blow.

In Madness Combat 2: Redeemer, an employee of the month award for perfect attendance is shown on one of the walls inside The Sheriff's building, and their name is Rich. In Incident: 011A, Rich is briefly seeing wielding a knife behind his desk and attempts to attack a MAG Agent showing he's slightly more skilled than most other grunts but he's still killed off rather quickly, though this death is non-canon.

In the story mode of Madness: Project Nexus 2, Rich's award can still sometimes be seen on the walls 30 years later and Rich now has a long white beard, working at the power plant where he does Energy Logistics. He assists Hank in shutting down the plant after assuming he's there to replace him.

Scrapeface is the protagonist of the Madness Combat short An Experiment. Once a normal Grunt working for the A.A.H.W., he was selected as the test subject for an experiment to see what would happen if someone's hands were moved far from their body. As the experiment commenced, the Grunt subjected himself to a seemingly uncontrollable self-mutilation before 'transforming' into Scrapeface. Through unknown means, the experiment had granted Scrapeface with reality-warping powers, incredible strength, and the ability to use telekinesis. He used this ability to brutally kill an Engineer by ripping them in half, and a Soldat by launching them into a wall, but died after grating away most of his body on the floor, then launching what little was left at an A.A.H.W. Scientist, only for this to fail when the remaining piece struck the wall and burst into a spurt of blood. 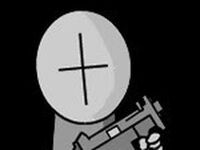 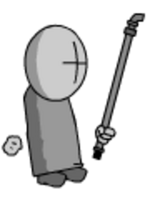 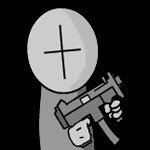 Rich's employee of the month award. 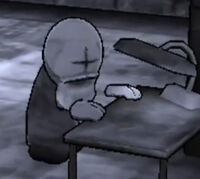 Rich after waiting 30 years for a replacement.