Villains Wiki
Register
Don't have an account?
Sign In
Advertisement
in: Mature, Game of Thrones Villains, Sadists,
and 56 more

Gryff Whitehill is the secondary antagonist in Telltale's Game of Thrones Video Game. Gryff Whitehill along side his father Ludd Whitehill serves as one of the main antagonists of the game. Gryiff Whitehill was introduced as an arrogant, incompetent spoiled brat but as the game goes on Gryff Whitehill becomes much more sadistic and evil, taking enjoyment out of the pain of the innocent. Griff crosses the Moral Event Horizon after becoming the main cause of Rodrik/Asher's death.

He is voiced by Sacha Dhawan, who also portrayed O in Doctor Who, and Steel Serpent, in Marvel's Iron Fist.

Gryff Whitehill is the youngest son of Lord Whitehill. Being his youngest son he was often bullied by his two older brothers, with his sister Gwyn and his father being the only ones who were decent to him. Gryff was easily being brash and easily tempered due to his childhood. Like his father, Gryiff Whitehill he has a deep hatred for the Forrester family, calling them "arrogant", "weak", and too proud for their own good, Griff wants to the Forresters' proud spirit break by any means necessary even resorting to abusing woman/children, physical/psychological torture, and killing innocent civilians under House Forrester's protection just to see Lord Rodrik Forrester and his family suffer.

A Sword in The Darkness

He was selected by his father to lead the garrison in Ironrath, to keep House Forrester in line and discipline them if they they ever tried to resist. Gryff Whitehill in hopes to prove himself as a strong warrior to his father and make him proud by taking full control of House Forrester and humiliating Rodrik Forrester by making him look weak and pathetic, even beating an already crippled and wounded Rodrik in front of both his men and sister.

Elaena and Arthur Glenmore arrive with the news that Lord Whitehill had pressured Lord Glenmore into marrying Elaena to Gryff. Elaena, disgusted by the fact arrives with 10 Glenmore soldiers to help Rodrik overthrow Gryff. Rodrik arrives in the great hall to confront Gryff who is seen beating and berating the maester. Rodrik after a brief fight summons the Glenmore soldiers who restrain Gryff. Rodrik beats Gryff to the point of blinding him before sentencing him to a cellar. When Ramsay arrives in Ironrath, Gryff, like the others is nowhere to be seen. His fate and whereabouts after this are unknown

Episode Three: The Sword in the Darkness

Episode Five: A Nest of Vipers 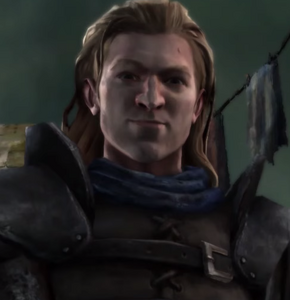 Gryff Whitehill's evil grin after causing the death of Rodrik or Asher. 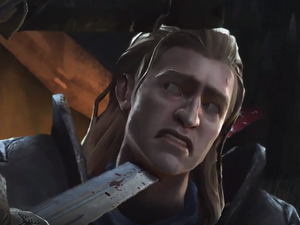 Gryff seconds before getting decapitated 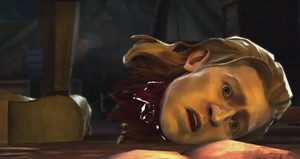 Gryff after being brutally decapitated by Rodrik.