Collect/destroy cloth creatures and the Traveler.

The Guardians, also known as the War Machines, are the main antagonists of the 2012 artistic puzzle platforming game Journey. They are weaponized creatures left over from a time long past.

Long ago, a large mountain produced life and magic cloth. Creatures formed from the magic cloth, resembling cloth jellyfish, dolphins, and whales. The civilization of the Rythulians was born from these powers, and the magic cloth was used to power all that was built.

However, conflict broke out, and two groups of people warred over the magic cloth. Cloth "whales" were outfitted with machinery and spotlights, creating Guardians. The Guardians were sent out to collect cloth, resulting in the loss of power in civilization. The loss of cloth and the war eventually led to the near extinction of Rythulians.

Shells and parts of Guardian armor are seen strewn throughout the desert in the first few levels.

The Traveler first encounters the Guardians in the Tunnels, where they seek out any cloth pieces or creatures and attack them, either collecting them or destroying them. This includes the Traveler's scarf, which allows the Traveler flight. They scan the area with massive searchlights; if they find cloth or the Traveler, they will attack and tear pieces off of both. They can be avoided by hiding in old armor shells.

They later appear again on the Mountainside, where they more viciously search and attack the Traveler. If the Traveler manages to get past them, he/she will reach the summit.

The Guardians appear as long, dragon-like monsters with metal and stone blocks serving as armor, They have six sharp wings on their front half and a blocky head with a single blue eye in the front. Their searchlights are blue until they see cloth, in which case the searchlight and the eyes turn red. 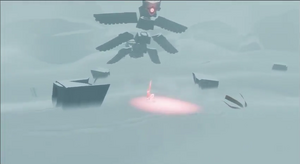 A Guardian finding a player. 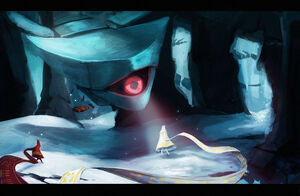 Artwork of a Guardian finding a player. 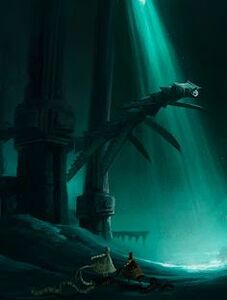 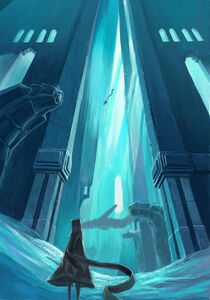 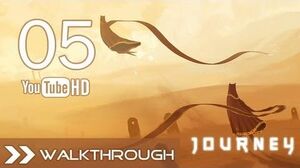 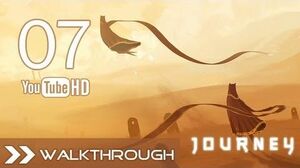