Carrying out missions for Bias.

Assist Bias in his goals.

Guardnoid Gash is the secondary antagonist of Chojuu Sentai Liveman. He is a robot constructed by Great Professor Bias to act as his bodyguard, and is the only one aside from Bias himself who knows of his true plans.

He is the one who enlarges the defeated Brain Beasts by firing his Giga Phantom attachment at them. He is typically seen within the Brain Base polishing his pistol.

He was by Hideaki Kusaka, who later voiced Grey, and physically portrayed by Naoki Ohfuji.

Gash was constructed at some point by Bias and programmed with knowledge of his true schemes involving the Giga Brain Wave.

After the Livemen appeared to challenge Kemp, Mazenda and Obular during their attack on Academia Island, Gash was sent out to provide support to them. He created the Disconnect Brain using a blank Brain Chaos and later enlarged it after it was defeated by the Livemen.

Gash participated very little in the schemes of Bias's students, rarely leaving the Brain Base for reasons other than to enlarge a defeated Brain Beast.

When Doctor Mazenda achieved a 1,000 IQ, Gash was sent out to extract her brain, holding a knife to her neck and capturing her. However, Gou attacked Gash and bought Mazenda an opportunity to escape. Gash easily tossed Gou aside and went after Mazenda, but was soon met by the five Livemen. The Livemen attempted to hold off Gash to buy time for Mazenda to flee, but Gash fought through all of them and continued his pursuit of Mazenda. As Gash cornered Mazenda on the side of a cliff, Mazenda chose to roboticize her mind to prevent Bias from being able to extract it. After using his ring to kill Mazenda with a homing beam, Bias called Gash back to the Brain Base.

After Doctor Kemp reached a 1,000 IQ however, he willingly submitted to Gash when he arrived to claim his brain and allowed the Guardnoid to extract it. While the Fear Beast Brain that formed from Kemp's brainless body battled the Livemen, Gash boarded his shuttle to return to the Brain Base with Kemp's mind. Before the shuttle closed up and took off however, Yusuke was able to board it and sneak inside.

Gash delivered Kemp's brain to Great Professor Bias, who used it to complete the Giga Brain Wave and use the twelve 1,000 point brains he possessed to mass hypnotize the entire world into submitting to him. As Yusuke attempted to find the Brain Room and stop Bias, Gash led a team of Jimmers to deal with him. However, Yusuke became Red Falcon and fought his way through them before figuring out where the Brain Room was and going inside to confront Bias.

After Bias reverted his body to that of a child to counter the damage Red Falcon had done to his Giga Brain system, Gash arrived and incapacitated Yusuke with assistance from Electron Brain. He stood beside Bias as Bias had the Brain Base descend into Earth's atmosphere and attack a city. After the other Livemen used Super Live Robo to damage the Brain Base and cause it to crash, Gash and Electron Brain fought the Livemen while Young King Bias fled to a cave with Kemp's brain. When Kemp rallied Bias's other eleven victims he used for the Giga Brain Wave to rise up against him and caused Bias to revert to his true age, Gash sent Electron Brain and a team of Jimmers to fight off the Livemen while he escorted Bias to safety.

Gash was then confronted again by Red Falcon and fought him in a one-on-one duel. Red Falcon succeeded in damaging Gash and slicing off his arm, but left to assist his teammates in fighting the Electron Brain before he could finish Gash off. After the Electron Brain was destroyed, Gash used the Giga Phantom to enlarge it despite his damages before returning to Bias and leading him back to the Brain Base.

Once they arrive inside, Bias orders Gash to activate the Base's main engine so they can take off back into space, but because of the damages the Base sustained it malfunction. As the Brain Base explodes around him and Bias, Bias asks Gash what the explosions are and Gash tells his now senile master that they are from fireworks to celebrate Volt's victory in conquering the Earth. Bias then starts to hallucinate the people of Earth chanting his name and asks Gash if he can hear it, to which Gash lies and says he can, allowing Bias to die believing he has won.

After the Brain Base collapses, Gash's head is thrown outside the base from the explosion and begins projecting footage of Volt's many schemes throughout the series. Seeing this made the Livemen lament that Gash didn't have anything happy stored in his memory, only the evil plans of Bias and his students. Gash's head continued to display footage before sinking into the ground as the end credits roll. 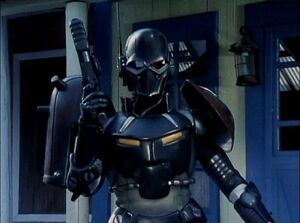 Gash while hunting the robot HANAKO. 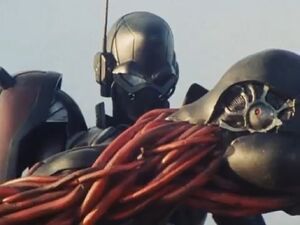