Keep order in the computer world.

Stop rebel programs from taking over.
Torture Programs with their pikes.
Aid the MCP in controlling the Grid and eventually take over the real world.
Stop Tron and Kevin Flynn.
Stop Beck (all failed).

The Guards are security programs that appear in the 1982 Disney sci-fi film TRON. They keep order withinn the computer world, they serve the MCP, Sark, and their lieutenant. Eventually, CLU 2 would take over the grid, and they would serve him.

They were first seen when Flynn got digitized inside the grid. When he hacks into the computer, the Guards walk over to him and starts to stun him, and tells him to get moving. The Guards serve to be security programs, following their higher-ranking leaders to keep order by any means. The guards are lower rank, as sentries, lieutenants, and generals are higher in their position. In addition, the guards are outranked by the Black Guards.

The guards' duty is to watch over the pit cells, and taking of torturing prisoners. They show themselves to be loyal, and hold prejudice beliefs against others, similar to their leaders. In addition, they are seen relaxing in a club of Argon City, suggesting they might have some free will, and have normal lives when not working. They also appear to have some self-preservation, as one guard surrendered to Beck when threatened with his own pike.

During the events of the first film, the Guards are seen trying to stop programs Tron, and the user Kevin Flynn from defeating the MCP. When CLU 2 overthrew Kevin, and took over the Grid, he placed the guards to fight off the rebel users and programs. In Tron: Uprising, the guards are still in place, and attempt to stop Beck, a rebel user who allies himself with Tron. However, there is a possibility that they were not the same guards in the first film, as their appearance is different.

In Tron 2.0, they appear to replaced with Intrusion Countermeasure Program (ICP), who are security programs who stop viruses and unauthorized programs.

The guards appear to be big and bulk with their gear, and their face is black, and doesn't have a face like other programs. Their suits glow red, implying that the guards' colors are for loyalty to MCP and Sark.

The Guards use long prod-like weapons, often using them to torture prisoners or programs. The prods are capable of blocking attacks, and can stun programs. 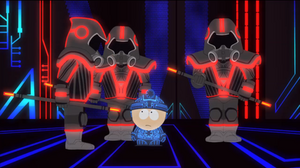 As they appear in South Park.
Add a photo to this gallery

Retrieved from "https://villains.fandom.com/wiki/Guards_(Tron)?oldid=3665863"
Community content is available under CC-BY-SA unless otherwise noted.