Secure BB-8, Rey, Finn and bribe them to the First Order for money (failed).

Mechanically-Modified Criminals
The Guavian Death Gang are a minor antagonistic faction in Star Wars: Episode VII - The Force Awakens. They are a criminal organization that have had dealings with Han Solo in the past and were fierce rivals of Kanjiklub.

Members of the Guavian Death Gang and one of their negotiators, Bala-Tik, encountered Han Solo and Chewbacca on the freighter Eravana. They were accompanied by Kanjiklub when they threatened Han Solo and expressed their impatience with him and his endless excuses, after Solo delayed on repaying them the 50,000 credits he foolishly borrowed.

When Bala-Tik recognized BB-8, he told Solo that the First Order was looking for the droid and for the fugitives Finn and Rey. Upon hearing this, Rey thought of activating the blast doors on either side of Han and Chewbacca to trap both the gangs. Rey activated the wrong doors, releasing the three rathtars Han Solo was keeping on his freighter.

The rathtars devoured most members of the Guavian Death Gang and several members of Kanjiklub, including their leader Tasu Leech and his lieutenant Razoo Qin-Fee, on board the freighter, leaving only Bala-Tik and his surviving men, with the addition of surviving Kanjiklub henchmen, as the sole survivors. During the battle, Han Solo and Chewbacca escaped on the Millennium Falcon with BB-8, Rey, and Finn. Bala-Tik then contacted the First Order and told them that BB-8 was on the Millennium Falcon. 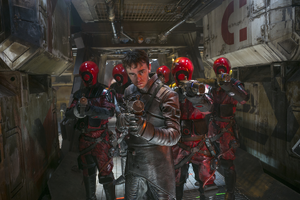